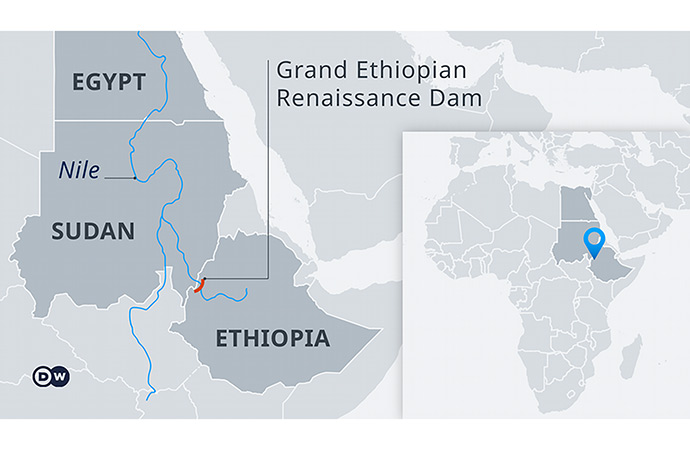 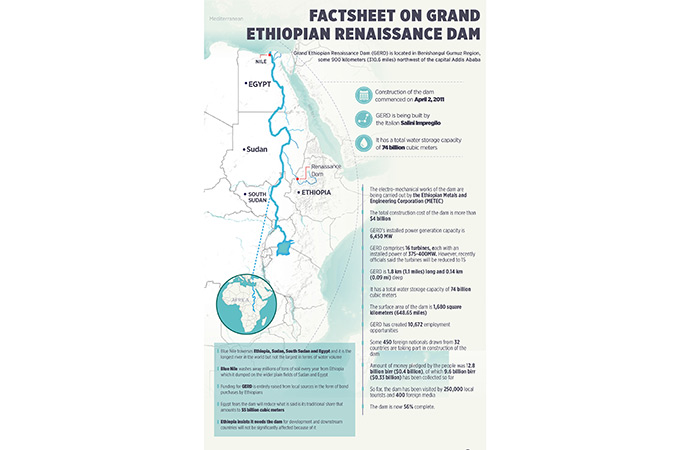 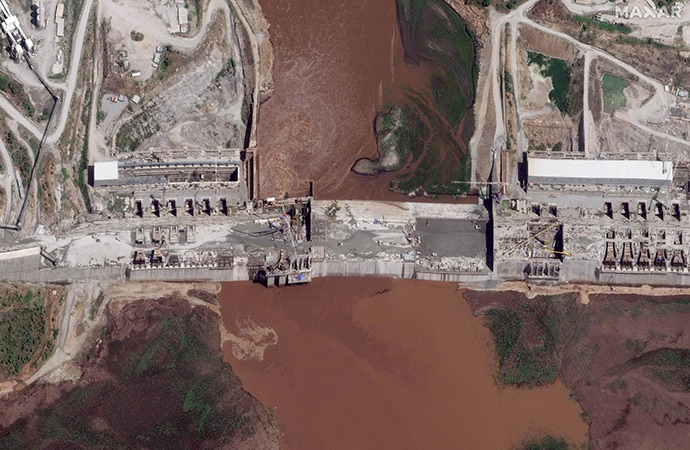 The negotiations for the Grand Ethiopian Renaissance Dam (GERD) have entered a critical stage; it is pending a treaty between Addis Ababa, Khartoum and Cairo to guarantee Ethiopia's development rights in exchange for Egyptian's and Sudanese's rights to life.

The assembly of a limited African Union (AU) summit on Tuesday July 21th, via videoconference ended without achieving an actual result to solve the problem of the Dam.

The Blue Nile is the source of- by far -the largest part of Egypt's annual share of Nile water. It is across the Blue Nile that Ethiopia has built the GERD; with its 74 billion cubic metre (bcm) reservoir.

After the summit, Sudan sounded less upbeat than Ethiopia. Sudan had referred to Tuesday's summit as productive.

At the conclusion of the summit, Sudanese Irrigation Minister Professor Yasser Abbas said that Ethiopia had promised to study the Sudanese proposal to remove the negotiation battle between the three parties related to the Ethiopian projects' future on the Blue Nile.

According to the Sudanese minister, the proposal offers Ethiopia the right to build additional projects and reservoirs on the Blue Nile; provided that it would take place within the framework of the international water law.

For its part, Egypt- in a statement issued by the president's office- confirmed to sticking to its demands of a fair and legally binding agreement.

On Tuesday following the limited AU summit, the office of the prime minister of Ethiopia, Abiy Ahmed, issued a statement stating that the first filling was already done. "The current rainfall and runoff situation in the region have made it conductive to fill the dam," and that "it has become evident over the past two weeks in the rainy season that GERD's first-year filling is achieved and the dam under construction is already overtopping," the statement said.

The statement of the Ethiopian prime minister, meanwhile, announced that the three riparian countries would continue to negotiate in the pursuit of an agreement.

After the summit, an Egyptian government official said Cairo and Khartoum had accepted that Addis Ababa projected the matter as "natural filling". He added that it was crucial Ethiopia refrained from acting defined and that it was the "high-level" decision in Cairo that it is in the interest of Egypt to keep the negotiations going.

Egyptian sources were rather more pessimistic; pointing to years of evidence that Ethiopia lacked the will to negotiate a fair deal.

Last week, Ethiopian Prime Minister sent a special envoy to meet with Turkey's foreign minister to discuss cooperation. The visit triggered tensions between Cairo and Ankara over Libya that reached a boiling point.

A day later, Ahmed arrived in neighbouring Eritrea for talks with his counterpart Isaias Afwerki who had met with Al-Sisi in Cairo a few days earlier. The Egyptian-Eritrean talks were interpreted in Addis Ababa as an attempt by Cairo to build alliances with Ethiopia's regional rivals.

1. The repercussions of the Renaissance Dam on Egypt as a direct result of storing 74 billion cubic meters in front of it, in addition to the evaporation and leakage losses during storage, as a deduction from the Blue Nile water going to Egypt and Sudan throughout the filling period.

2. Sudan will use its full share during filling, and consequently, the incoming amount of water to Egypt will be reduced by the amount of the annual Renaissance Dam storage, depending on Egypt compensating this deficit by withdrawing water from the High Retractable Dam stock.

3. The live stock of the High Retractable Dam amounts to 90 billion cubic meters, so most of the High Dam stock will be emptied during the period of filling the Renaissance Dam.

4. And if that happens, Egypt will be at risk in the years of drought, as was the case before the High Dam, and the desertification of lands. Egypt is exposed to major problems due to the absence of the role of the High Dam.

1. Extending the filling period of the Renaissance Dam to a level that allows high floods to compensate part of the stock shortage, so that the water level in front of the High Dam is no less than a critical level (165 m), which is the lowest that can protect Egypt from droughts, as previous Egyptian experiences have shown.

2. Reducing the storage rates in front of the Renaissance Dam in the years of drought to ensure that the high dam stock level does not go down into a critical level.

3. In the event that these guarantees are taken, Egypt can maintain its share and not prejudice the country's uses in all areas, except for a significant decrease in the High Dam electricity, especially in the drought years.

4. These rules for storage were agreed in the Washington document on last February 21th.

5. Concerning the operation of the dam, it was agreed in this document that Ethiopia passes from the dam after completing the filling of the natural river's actions in the middle and high years.

6. In the drought years, Ethiopia is spending more stock than the river's natural disposal to maintain the critical level of storage in the High Dam.

What does Ethiopia want?

1. Failure to adhere to the above mentioned during the filling period, especially during the different droughts.

2. Failure to commit to work by passing the river's natural disposals from the Dam and deducting part of it from Ethiopia when it needs it.

The implications of the new (rejected) Ethiopian proposal:

1. Egypt's exposure to droughts that destroys green and land.

2. And negative repercussions on drinking water, industry, navigation, etc. that Egypt cannot tolerate or coexist with.

It remains to be noted that the European Investment Bank suspended the project of financing the idea of the Renaissance Dam after Egyptian efforts in 2009.

In the beginning of 2014, Egypt succeeded in issuing an international decision to stop funding the Renaissance Dam by the decision of the World Bank, the European Union, Russia and China after the honorable efforts of the Egyptian state.

Because Simply international law and the agreements concluded in the row of Egypt and do not allow Ethiopia to build a dam with these specifications, in contrast to the extensive environmental and economic damage resulting from it to the downstream countries.

The size of the construction in the Dam at that time only 32% was funded by Ethiopian self-financing did not exceed One billion and a quarter dollars.

The ban on financing the project was lifted after Egypt agreed and the Principles Agreement was signed in 2015 to a significant degree.

When the Ruler and the Ruled look past each other