TransEnd: for the love of the marginal community of transgender people 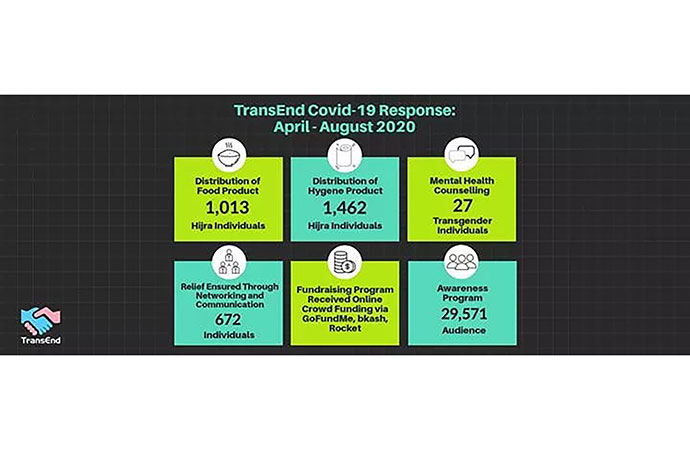 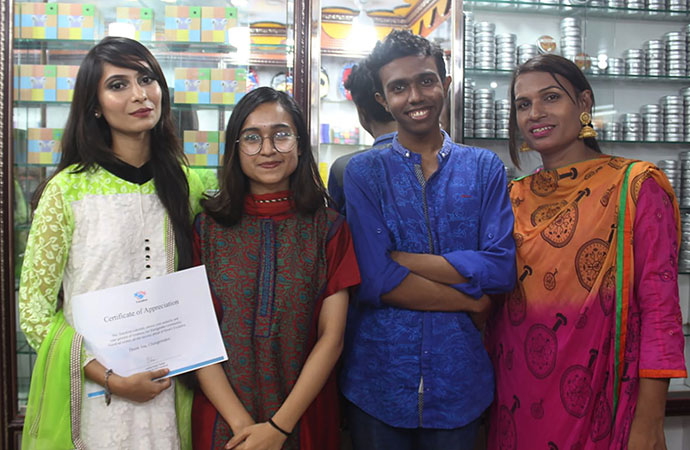 The societal system in Bangladesh often belittles the people of the third gender, also known as the transgenders or commonly known as 'hijras' in the local dialect. They have been brutally stigmatized, penalised and alienated from the society by the people, making the irony that showcases hatred from the common people to the common gender. As a result, the transgender people are left with no choices but to intimidate others for a living. That being said, some of them also get generalized and castigated even being meritorious and wishful to have regular opportunities in the society, similar to those opportunities which have been offered to the rest of the groups.

Meet TransEnd - an organization, that cares for this marginal community. A youth-led, non-profit, Bangladesh-based organization that aims to help the 1 million transgender and hijra people of Bangladesh by bridging the gap between the transgenders and mainstream community, through social opportunities in sectors such as education, training sessions, sensitization programs, health and hygiene campaigns, employment and entrepreneurship.

Lamea Tanjin Tanha, a 20 year of age female initiated TransEnd as its Founder and CEO and currently doing her undergrad in Dhaka University, Department of English. An Ashoka Young Changemaker, Tanha is leading the organization which recently got selected for the incubation program by YY Goshti. Before the pandemic of COVID-19 started impacting and affecting lives, TransEnd arranged a training session on "Fashion and Lifestyle" for enthusiast transgender people and soon after that, the organization scoped three trans people getting freelance modelling opportunities in different fashion shops. It also helped about 1 thousand hijra people with food products and hygiene items at the beginning of the pandemic. And soon, they are aiming to start a new project to scope jobs for 20 hijra people in the next month and following.

''When I was 12 years old, my mom once shared this story with me how a bunch of transgenders once came to our house when I was a newborn baby and my mom got to interact with them. She still remembers the name of the leader (guru) of that hijra gang, Mala Hijra. My mom was so welcoming and friendly towards them, unlike other Bengali people which made Mala Hijra in tears with emotion and share my mom with her life struggles. Listening to her life story, my mom got emotional too and told me to be empathetic towards them and to do something to eradicate their misery. After listening to the story from my mom, I was moved and determined to help them no matter how challenging it is" - Tanha shared her journey to Dhaka Courier, explaining on how she started this humanitarian initiative at this early age.

After her SSC examination in 2016 from Viqarunnisa Noon School and College, Tanha started spending her time and research work on this project, which she finally and formally started in late 2019, after her admission in the Department of English at Dhaka University.

"I used to do a lot of fieldwork before launching the organization", she continued. "I believed, if I don't understand the hijra people from the core of my heart, I would not be able to work for them. So I started talking to them in local transports, in parks and even going to their hubs and residences. I used to talk to them, got to understand their psychology, their needs and sufferings. Each of them has individual stories - most are full of miseries. Knowing their stories eventually made me strong, determined and passionate about creating the organization.''

Completely led and operated by some young, broad-minded, compassionate and hardworking souls - there are several departments in the organization, with each has its own administrator as the following: Afra Ibnat as the Chief Strategy Officer, Shakira Janan Rida as its Database Administrator, Tasfia Tarannum Ridita on Communications, Abreshmi Anika Chowdhury on Outreach and Partnership, Nayem Molla and S.M.Abu Kavi Sadat on Education and Curriculum department; Rahin Amin, Nahian Rashha, Mantaha Kishwar, Zohan Araz Khan at the Editorial team, Durra Nibrose Hassan on its Online Operations, Samiha Tahsin Medha and Mushfiqur Rahman on Marketing, Maimuna Binte Mustafiz on Graphics, Hasibul Haque Imon as the Legal Head, Samia Tanjin Minha on Videography and Tahjib Islam Jami on Photography - along with approximately 40 dedicated volunteers.

Thanking the co-warriors in this initiative, Tanha expressed her gratitude - "TransEnd was not alone in the journey. During our fundraising program, a lot of other non-profit organisations and individuals from inside and outside Bangladesh spread their helping hands towards us. Therefore, heartiest thanks to them who believed in the cause, showed solidarity towards us and helped us tackling this crisis."

"The journey behind founding and running TransEnd has always been challenging, even we got threatened by radical fundamentalists. Despite all the odds, TransEnd is moving forward with the aim and goal to assist the trans community to earn the respect they deserve as human beings. I can speak for myself that I am committed to establishing this goal until my last breath, and I am lucky that I got the opportunity to work for them" - Tanha, one of the kind-hearted and brightest young souls in Bangladesh, explained her level of enthusiasm and dedication behind this noble initiative as her 'dream project'

Protesters took to the streets again in the Thai cap ...