Livestock in Bangladesh: Buffalos Farming & Some Other Issues 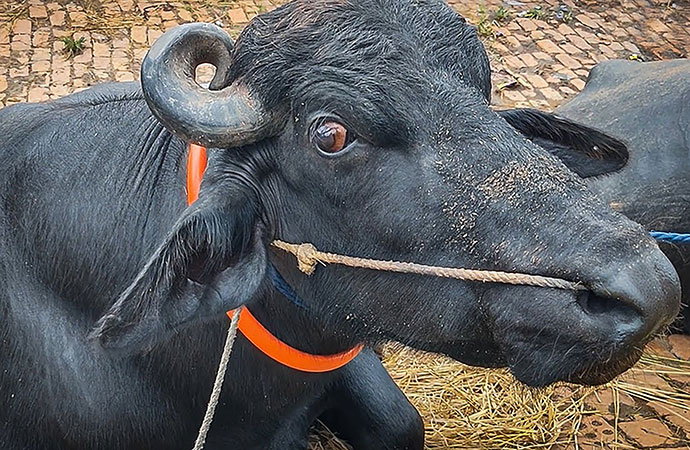 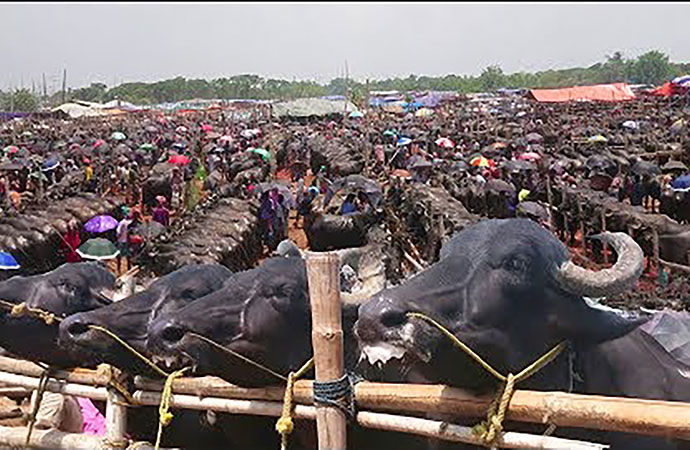 Buffalo, a kind of load carrier animal ploughing land is not unknown in Bangladesh. Truly this animal is very common in some places in Bangladesh. The entire North Bengal, Kushtia, Jashore, Faridpur, Greater Mymenshingh are the dwelling areas of buffalos. Besides, these are found in the coastal areas and Char lands of the mighty river Padma and Jamuna in Bangladesh. In the chars of the rivers and costal islands buffalos are being reared in multitudes. But in the plain land people rear this animal not in a farming way. They just rear 3-4 buffalos in a group. About 3/4 decades back buffalos were also required for ploughing side by side with cows. But now it is gradually declining. Buffalos are now no more used in ploughing. The general picture of tilling or ploughing land is changed now. It is true that ploughing land is not now dependent upon cows and buffalos in Bangladesh. Rapid change in agriculture has transformed the scenario in the rural areas. Now power tiller is heavily used in ploughing agricultural fields in Bangladesh. Three decades back it was very common in Bangladesh that one could find many cows grazing in the fields and farmers ploughing their agricultural fields from the running trains and buses outside urban area. Now that scene is getting rare.

Recently rearing livestock has become a commercially viable sector in Bangladesh. Local entrepreneurs are now taking interest in livestock farming since the decade of nineties of last century. They invested large amount of money for farming in the rural and as well as sub-urban areas. Maybe this is why we do not find that much cows, buffalos and goats grazing in barren agricultural fields because people keep and feed them in the sheds. Recently cows farming, goats farming have become popular in Bangladesh. Few years back Bangladesh was heavily dependent on supply on Indian cows. In time of Ed-ul-Azha festival a large number of Indian cows used to come to cattle market from the Indian border formally or informally. For that reason government had to open corridor for cows coming from India.The aim was to collect the duty from the cattle business. In this way huge amount of revenue was collected. Few years back it was a huge business. But government of India took a decision not to encourage cattle sending to Bangladesh and they started using government machinery to stop sending cattle to Bangladesh. This initiative indirectly helped Bangladesh cattle rearing and it is assumed that our cattle population has gone up after Indian government policy regarding not sending cattle to Bangladesh. As a result of this Bangladesh is now no more dependent upon Indian cows or cattle. The small entrepreneurs from greater Kushtia, Pabna, Jashore and entire North Bengal have invested huge amount of money on livestock farming. They have established huge number of small farms for cows rearing and they have a target to sell those cows during Edul Azha. In addition they have also a target of marketing of those cattle round the year.

Besides cows, buffalos are not getting that much importance. The role of buffalos as load carrier is declining gradually. Because huge number of battery charged autos are now plying in the rural roads. People are now using tractors, power tillers and autos for carrying their products from agricultural field to their residence and to the mills. Over the years modern technology and mechanization of agricultural are taking place and people have become used to of this situation. Maybe, this is why we do not find cows and buffalos grazing that much in the agricultural fields. Among the cattle Black Bengal goat of Bangladesh is world famous. Recently black Bengal goat population has increased considerably. Since 2002 a campaign of promoting this species of goat is going on. The finest black Bengal goats are concentrated in greater Kushtia and Jashore area. Though, this species of goat are more or less available all through Bangladesh. Now in the weekly Hut and in time of Eid ul Azaha this species of goats are being sold considerably. Mutton from this goat is very tasty and nutritious. Moreover, the quality of leather of this species is considered one of the finest and it has got a brand value in European market as Kushtia hide of black Bengal goat.

Among the livestock Cows and goats get more importance all the time. Because we get protein, milk and hide from these animals. Even those animals are environment and echo friendly. The dung of these animals is used as good organic fertilizer after composting. This cycle is directly helping the productivity of our agricultural land. But there are another two species of livestock which have potentiality and those are buffalo and sheep. Sheep is being reared in different places of Bangladesh. Mainly Chapainawabganj, Rajshahi, greater Noakhali are the sheep rearing areas. Sheep are also the good sources of mutton. Wool/fur is the byproduct of sheep and that is the raw material of woolen cloths in the winter. At Chapainawabganj some families extract wool from sheep they foster. Though it is now going in a small scale but this initiative has a great potentiality for collecting wool from our native sheep.

It seems that we are ignoring the potentiality of our native buffalo. Buffalos are concentrated mainly in the North Bengal, greater Kushtia, Jashore and coastal Islands. It is also true that more or less buffalos are seen everywhere in Bangladesh. The Char lands of different rivers and coastal area are the ideal place of buffalos. Buffalos are also the good source of milk, beef and other dairy products. In the coastal area a special type of sugar free yogurt prepared by buffalo milk is very popular. People entertain guests in different occasions with this yogurt and the guests feel honored. Generally people take this as desert with sugar or gur/patali after having meal.

Traditionally buffalos are very warmth animal. They like muddy place and water body. So in the rearing time the owner must be caring about cooling body of the buffalos. That is why char land and coastal Islands are the ideal habitat for buffalos. We know buffalo is useful animal. It can be used as like as cows. It can be a good source of protein and milk. We know livestock is one of important sectors of Bangladesh economy and buffalos can play an important role to flourish our livestock sector. So, special care and attention should be given to the buffalos by the appropriate authorities for the betterment of the people and economy of the upcoming Bangladesh.