Climate change has emerged as a global concern in the past 20 years. One particular worry is the potential disastrous consequence for agriculture and food security in many parts of the world, especially in developing countries. Crop production is extremely vulnerable to climate change and it has been predicted that climate change will impact negatively on agricultural yield in the 21st century through higher temperatures, more variable rainfall and extreme climate events such as floods, cyclones, droughts and rising sea levels (Reza, 2019). The United Nations Framework Convention on Climate Change also identifies the danger to food production as a major concern.

In Bangladesh, People directly or indirectly depend on agriculture. Coastal areas constitute about 2.5 million hectares, which cover about 25% of the total crop land of the country. Of this, nearly 0.84 million hectares are affected by varying intensities of salinity, resulting in very poor land utilization (Reza, 2019). In the Southern Khulna region (Paikgacha) 5.18 mm/year sea level rises has been recorded which may go up to 85 cm by 2050.

Geographic Feature of the Study Area 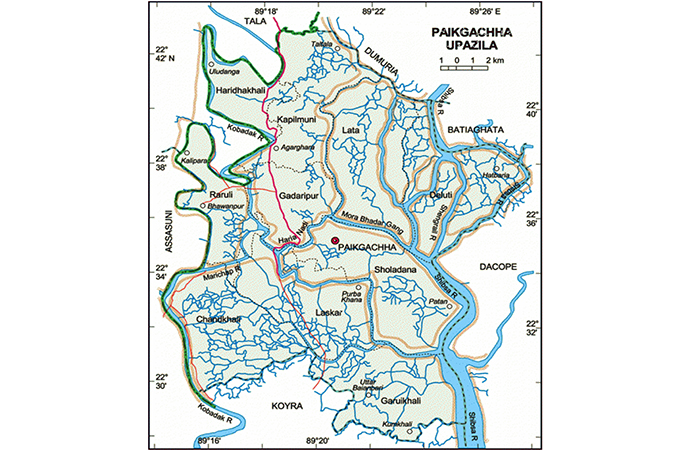 Only 36% people involve in agriculture in Paikgacha upazila. People are not interested to involve in agriculture because of low production rate. Crop production rate is low in this area due to excessive soil salinity. At present total cultivable land in this area are 24,918 ha. In Paikgacha, there one crop land (12,000 ha), two crop land (5,368 ha) and three crop land (7,550 ha). In this area, the classifications of land are: high land 2,850 ha, medium land 5,350 ha and medium low land 17,093 ha. Paddy (Amon, aus, boro), jute, wheat are the main crops in the study area. Water melon is also grown well in this area. The study area's climate is tropical in nature dominated by the south-west monsoon of the Indian Ocean. There are three distinct season warm (March to May), monsoon (June to October) and cool season (Nov. to Feb). In on average 70% to 80% of the annual rainfall occurs during the monsoon period. The cool season is generally pleasant and comfortable. Rainfall in this season is frequent. There are two major cropping season found in the Ganges belt area Rabi and Kharif season. Temperature and rainfall is important for these two seasons, as plants in the field are growing depending on rainfall pattern and temperature changes. 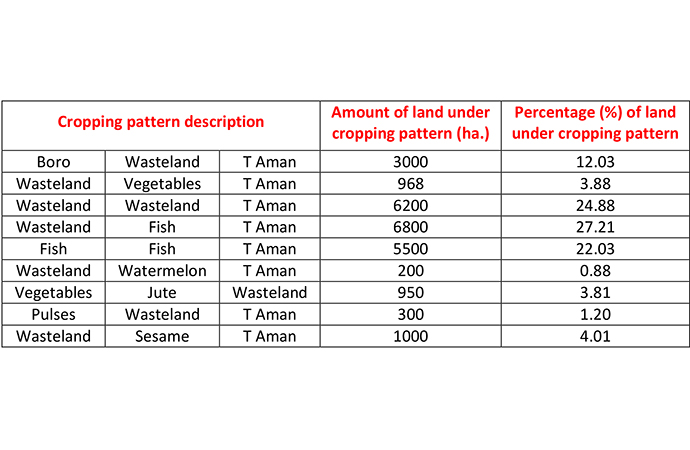 Monthly Income of the Respondents 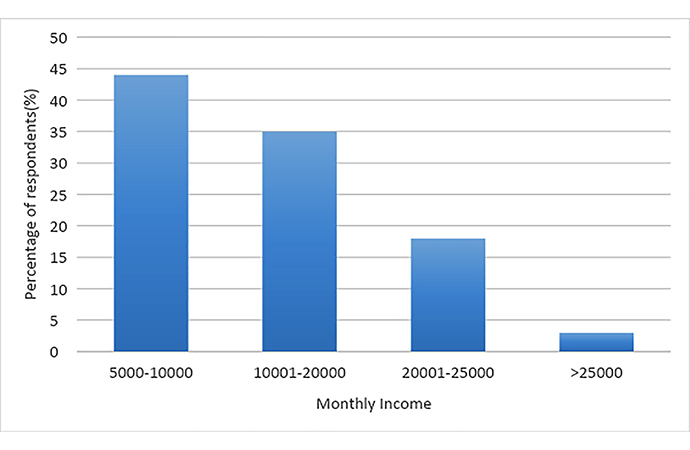 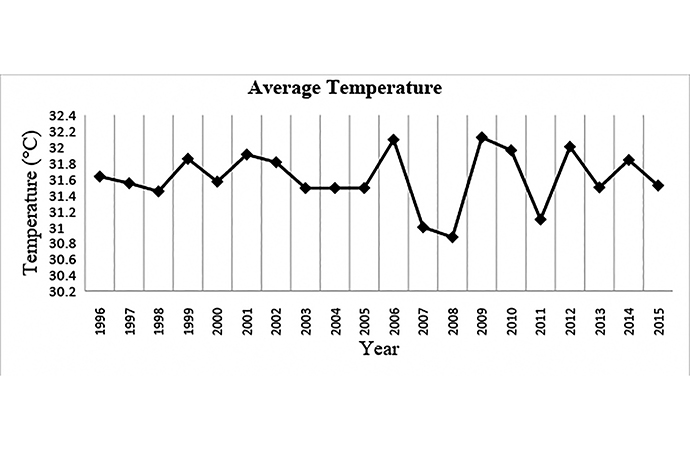 Fig 3. Average temperature variation of Paikgacha upazila from the years 1996 to 2015. 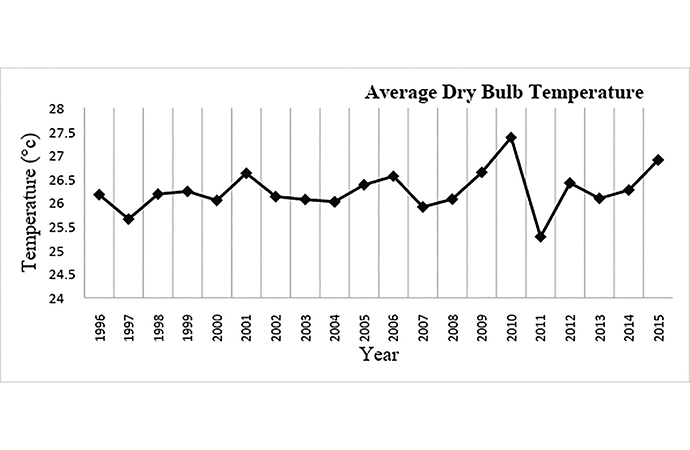 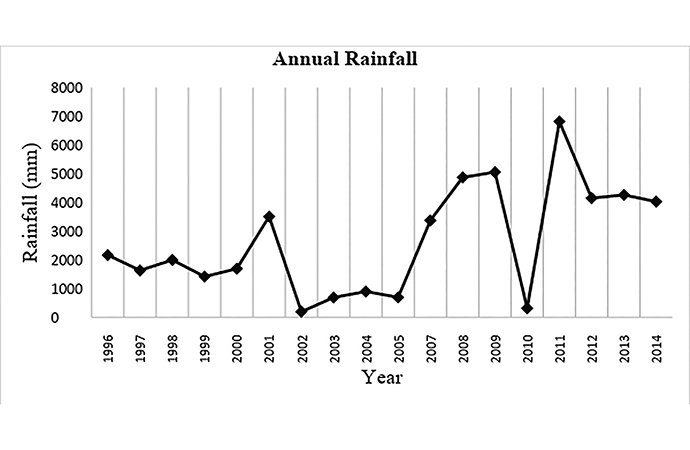 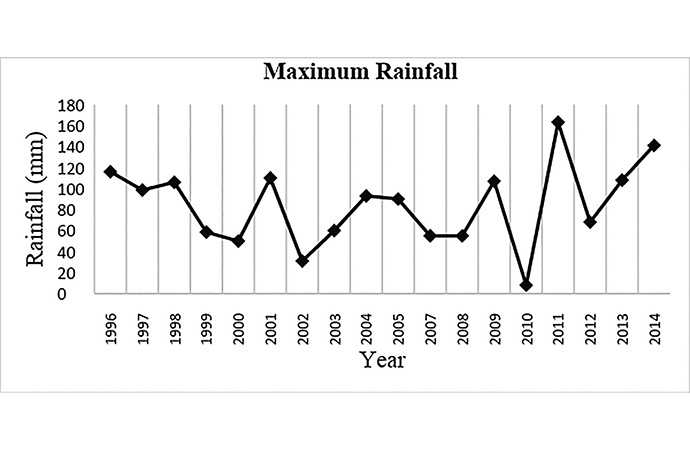 Change of Yield of Wheat 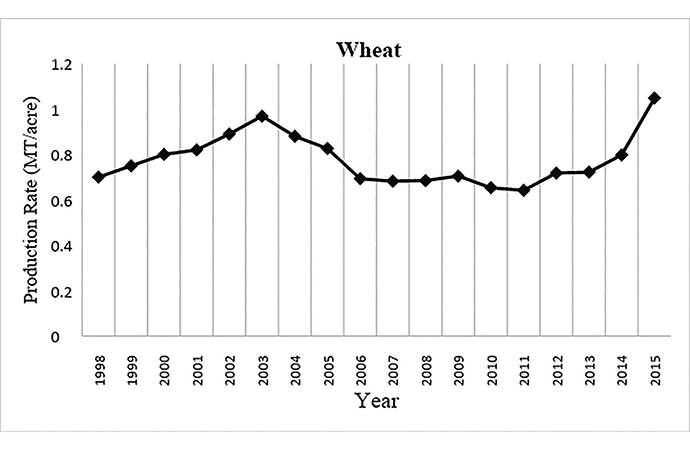 Change of Yield Rate of Jute 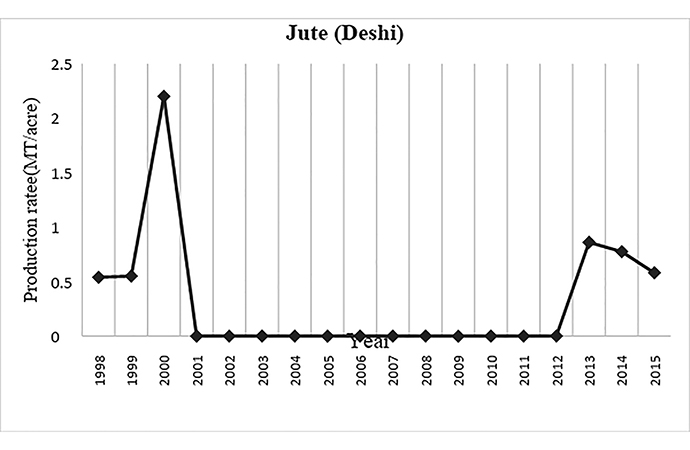 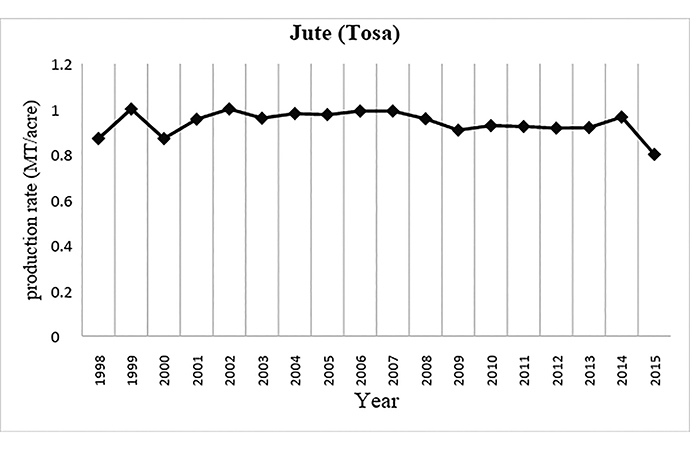 As the climate change impact cannot be solving completely, we should follow the adaptation measures. Adaptation is to follow some strategy to reduce climate change impacts on crop production. The following recommendation can be followed to improve the impacts of climate change on crop production in coastal region. 1. To stop ingress of saline water into agricultural land, necessary measures must be taken such as buildup sluice gate in every bridge and culvert, embankment of the riverside; 2. For availability of irrigation, rain water should be stored, ponds and lakes should be conserved; 3. Use salinity and flood tolerant seeds; 4. Use optimum amount of organic fertilizers; 5. Cultivate short durational and hybrid crop to increase productivity; 6. Shrimp culture must be stopped in agricultural land; 7. Provide enough healthy seeds and fertilizers from government; 8. Train farmers by agricultural officers to cultivate crops with modern technology; 9. Multi-farming such as paddy, poultry and fish can be a great source of agricultural products, income and it also ensures food security.

The Writer is an Environmental Analyst and Associate Member, Bangladesh Economic Association.

To COVID, with love!