Facing the Present Crisis in Bangladesh: Using Science with Bold, Democratic Imagination for Our Journey from the Bleak Present to a Brighter Future

The panic resulting from COVID-19 (Coronavirus), starting with the deaths in Wuhan, China, keeps spreading globally faster than the spreading of the virus itself. Quite apart from the immediate health dangers, now a new economic danger looms large, globally. We are already facing the prospects of a deep and lasting global recession, perhaps the worst since the Great Depression, regardless of the health policy and economic policy measures taken by China, European, the US and other countries. 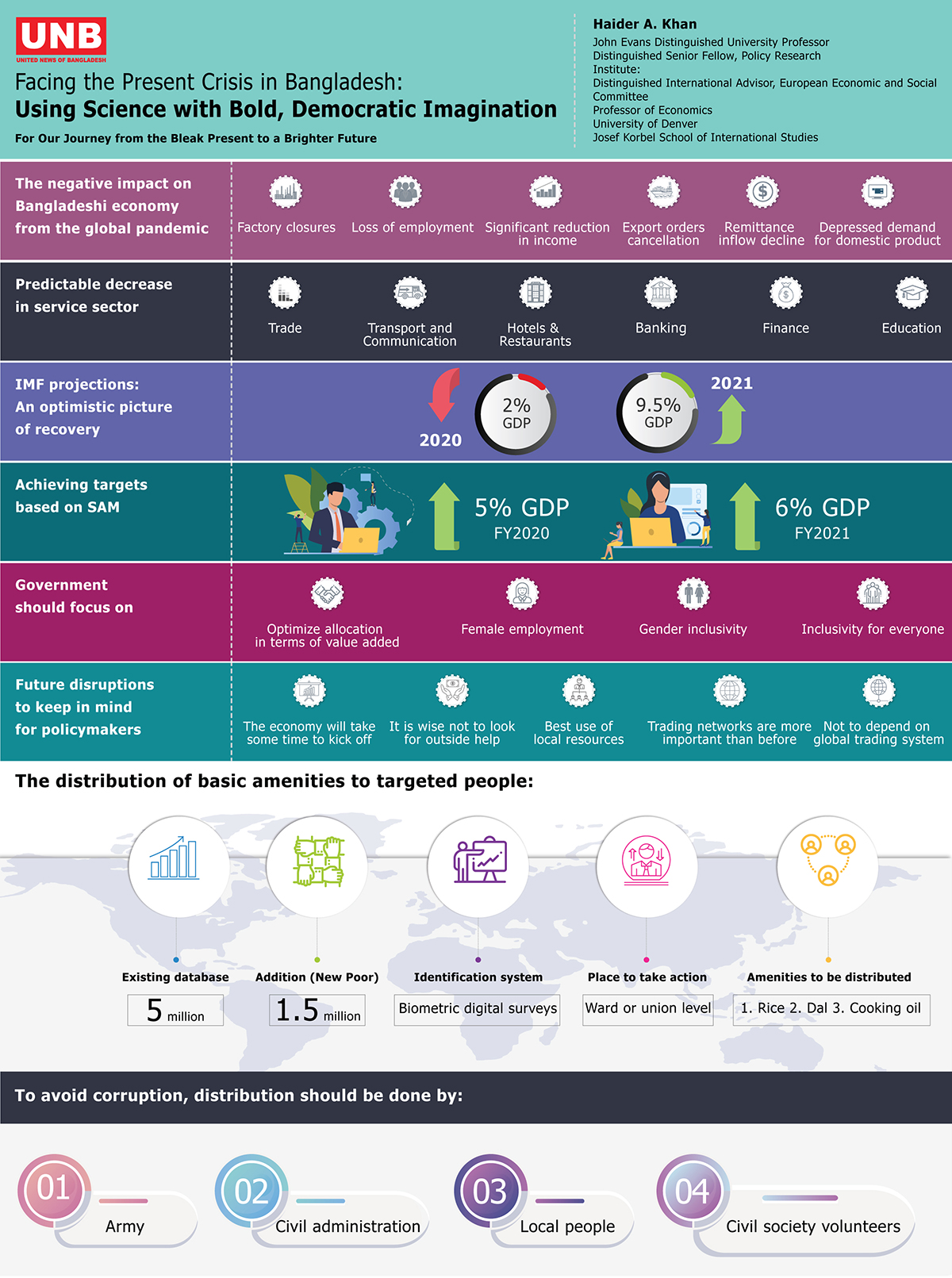 It is clear that China suffered the most initially. But timely policies have been effective in stemming the spread and starting an economic recovery which may prove be a relatively rapid V-shaped one. By contrast, other advanced countries such as Japan, the US, EU, along with many other smaller economies including some Asian and African economies are still deciding what to do. Here, the record of Bangladesh so far---especially given the relative paucity of resources---is better than that of many other countries including the advanced countries. But this is not the time to be complacent.

The government of Bangladesh has taken some bold and timely steps for countering the negative impact of 'global pandemic' from COVID-19 on Bangladesh economy. Like many other countries, Bangladesh recognizes the need to address effectively the severe consequences of COVID-19 with curtailed economic activities manifested in factory closures, sudden loss of employment and income with significant reduction in national output. Cancellation of export orders, declining remittance inflows, and depressed demand for domestically produced goods and services have already had an adverse impact. The services sector which includes trade, transport and communication, hotels and restaurants, banking and finance, education, etc. as in other countries, has predictably shrunk in capacity utilization. The recent IMF projections (World Economic Outlook Apr 2020) depict overall economic growth in 2020 at 2% but paint an optimistic picture of robust economic recovery in 2021 with GDP growth at 9.5%. . The conclusion of my own research and analysis is that in order to achieve a 5 per cent GDP growth rate in fiscal year FY20 and 6% in FY21, based on the 2017 Social Accounting Matrix (SAM) for Bangladesh and the computation of multipliers discussed in a technical paper, the country will need a further stimulus package. It is also necessary to optimize allocation by identifying the most affected sectors and their relative importance in terms of value added, employment including female employment, income generation and other aspects of gender inclusivity as well as inclusivity in general. The government has taken many significant steps already. My aim in my own technical modeling exercise has been mainly to provide further specificity by using the detailed data in 2017 SAM and related satellite accounts. I am also able to offer some modest forecasting capability to address some salient issues in the next 3 to 6 months period and (more modestly) some realistic basis for planning for the future beyond this crucial initial period.

Current economic modelling results show that the easing of monetary policy and implementing expansionary fiscal policies-even if they are imposed immediately and coordinated globally- will take some time to kick in. For Bangladesh, it is wise not to look for much help from outside but to use local resources to cope with the crisis. Consider also the role that trading networks have always played. Clearly, with globalization these networks of firms across the globe are even more important than before. With a large scale disruption the dynamics of network trade may easily break down. Since networks require time to build up again, such large scale disruptions will result in longer term malfunction of the global trading system. The policy makers in Bangladesh must keep such future disruptions in mind while addressing the immediate food and livelihood security issues. In addition to the budgetary and sectoral economic matters discussed above, it should also be mentioned that the Bangladesh administration has mobilized civilians ---particularly students--- and the army and has done rapid biometric digital surveys. The administartion also issued quickly identification cards to the refugees who number more than a million. The distribution of basic amenities has been organized on family basis keeping in mind the family structure, that is how many members, how many children or adults etc. are to be provided for. They are given fortnightly living assistance. The govt. has a data base of 5 million extreme poor, elderly, widow etc. who are to receive different kinds of support. If they can add with assistance from competent expert help from the civil society 1.5 million vulnerable people(the "new poor") and do biometric survey quickly issuing them biometric card that will open path to proper distribution. Through such quick targeting which should err on the side of inclusion---not exclusion--- the "new poor" can receive their required rice, dal, cooking oil etc from distribution centers at the ward or union level. The army along with civil administration and local people can do the survey rapidly. The difficulty in distribution and corruption can be overcome to a great extent by this process involving ordinary local people and civil society volunteers. Bangladesh has food self-sufficiency and that is a great achievement. I have discussed the details in my earlier report to IFPRI which is based on comprehensive national and regional data. How to ensure distributive justice for food is important. Here biometric survey is important and the Rohingya survey of 1 million has shown that this can be done quickly. We should also note the fact that the govt. has been successful in sending laborers to harvest in the Haor areas, known as the rice bowl of Bangladesh. While we should not be complacent in the face of this unprecedented global and national crisis, instead of losing our mental equilibrium and being hypercritical, competent members of civil society now have a solemn duty to serve the people by offering constructive policy advice and offering concrete help in implementation. That is my own modus operandi during this crisis so that future generations can look at this grim period and say proudly that we faced the bleak present bravely and wisely in order to face tomorrow with courage. We must act in such way now so that future generations will say that in spite of the odds against us, we did not surrender to pessimism and defeatism.

We need to work now to build our common future through our creative, constructive, optimistic vision, and bold action based on a deep dialectical understanding of reality.

Professor of Economics, University of Denver

1.
Facing the Present Crisis in Bangladesh: Using Science with Bold, Democratic Imagination for Our Journey from the Bleak Present to a Brighter Future
2.
No room for complacency
3.
Coping with the Coronavirus: The impact of a scourge across the spectrum
4.
The threat is real

The U.K. government warned of a “significant” recess ...

During more than a decade as North Korea&rsquo;s leader, Kim Jong Un h ...

Fall of Mariupol appears at ha ...

Mariupol appeared on the verge of falling to the Russians on Tuesday a ...

Lakhs marooned in 3 districts as rivers flow above d ..