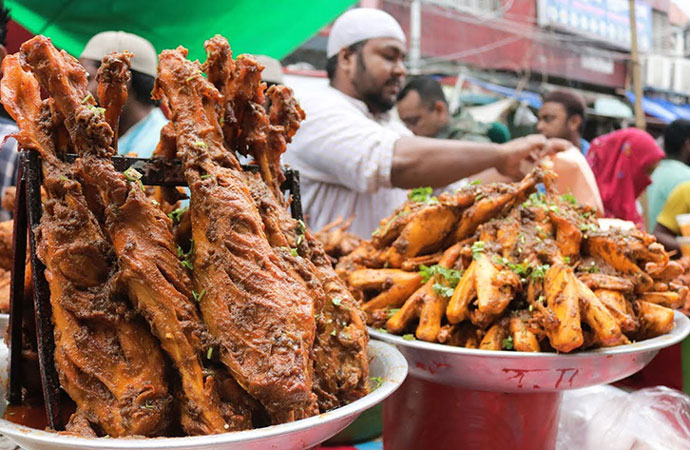 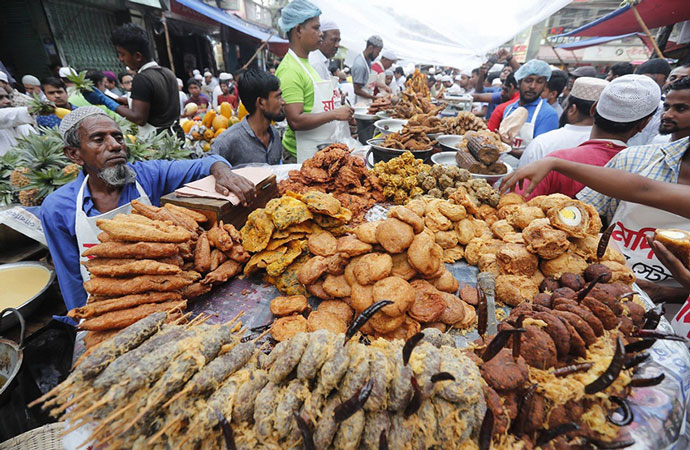 Iftar is here in full force and hitting us with gale force winds as we reel under the power of iftar ripping through our lives. And we love it, for it's about celebrating what we like most; eating. Celebrations are usually about eating anyway be it Christmas or Eid and if preceded by fasting it makes the pleasure all the more. So the zeal with which we fast can be compared with the fervor with which we have our iftar. It's important to have roza for without it we can't have iftar. So this is the most passionately observed religious ritual in Bangladesh. It's directly related to food and not as an annexure as in the case of Eid. It makes life beautiful and the belly full.

This year, the first few days were frantic and frenetic. Ancient hungers rang in young and old bellies as people moved out to the vendors, sellers, shops and homes which were marketing million kinds of iftar to be served to the faithful. Impromptu shops grew up everywhere and the hungry pious and not so pious crowded in front of the piles of many kinds of iftari and made merry with buying.

This was the first open one after 2 years of covid which made the celebrations so enthusiastic. People came in cars and parked in front of famous shops to add to pile goodies gathered from many other places. This is /was truly a joyous display of wanting to eat. And the iftar market was ready to serve.

The first few days were desperate displays of this desire and shops would often run out of goodies. Some barely lasted till the sirens rang out and the sight of upturned platters in front of shops was a reminder that the heavens open up to offer Iftari to make our finest and best gastronomic moments.

Now that it's cooling down a bit

Yet, even the iftari rush has to cool down and slowly the crowds begin to be a little less if not thin. The novelty of snacks every evening at the call of azan is there but the many tongues now look for variety too and there are so many to offer. There is of course the usual peanzu, beguni, chola , jilapi but there is something insistently middle class about this menu. It's traditional and handed down the generations' type of iftari and after the first few days, they get less attention from the hungry pious. Shopkeepers have to wrestle with the reality that even iftaris can get a bit of the same-same.

But one item holds sway declaring itself the king of iftari and that is halim. It's a recent addition to the menu though it has been here for years. It has become immensely popular after 1972 when many Biharis took to selling street food to survive the post war devastation. They added a new zing to it along with other forms of meat items and we have seen a revival of these. And every iftar shop sells a mandatory item.

Prices vary and they range from Taka 100 for a small plastic box of halim to a larger box from a fancier shop running to a 1000 taka easy. The really big names can quote and pull in many times more. Sometimes it's the address that counts. But it's there and possibly here to stay.

Street iftars are for the street people but one is not sure who they are because the crowd is getting mixed. The biggest cluster is of course the beggars -mostly women in burqas who ply this trade seeking charity and using pious notions of what a woman should wear , certainly in this season and ask for money. Some men are also part of the crowd but unlike the previous 2 years, street level iftari charity is less. It was common to see cars stopping and distributing white plastic boxes of tehari but this year it's not just less but almost missing. Maybe the relief of a low corona life has hit many people's sense of charity packed in plastic boxes.

But the street is also open to those unfortunate beings unable to make it home before the ifatar gong goes and hey must do with the offerings of dry cakes, bananas and tea served by gents and ladies selling makeshift "iftaris" sitting on the pavements.

It's everything goes season again.

These people survived Mariupol. Here are their stori ...

A year after a streaming service won Hollywood&rsquo;s top honor for t ...

When Rylae-Ann Poulin was a year old, she didn&rsquo;t crawl or babble ...

Brighten up winter cooking with citrus, from juice t ..

The pathbreaking death of Sarah Islam

The pathbreaking death of Sarah Islam

NATIONAL . The government raised the retail price of gas