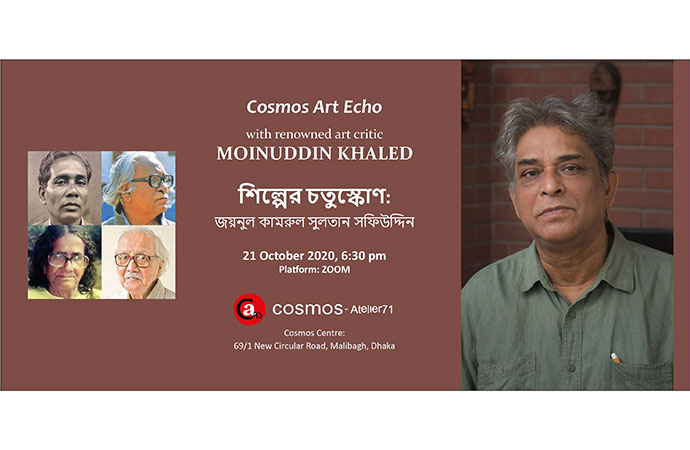 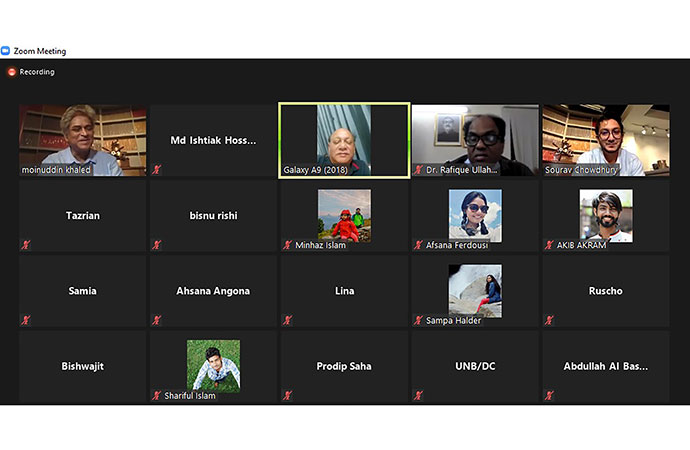 Four modern art maestros from Bangladesh - Shilpacharya Zainul Abedin, Quamrul Hassan, SM Sultan and Safiuddin Ahmed - have elevated the genre to new levels, each through the body of work they left behind during their lifetimes and the audience of modern art needs more image literacy to fully comprehend the work of the legends, said renowned Bangladeshi art critic Moinuddin Khaled at the 5th edition of Cosmos Art Echo on Wednesday.

"The brilliance of their simple yet profound artworks need deeper analysis that can only be achieved through proper image literacy of the audiences and fellow artists, for the betterment of Bangladeshi modern arts," the eminent art critic said as the speaker of the special art talk series organized by Cosmos Atelier71, where he described the greatness of the four legendary Bangladeshi artists who revolutionized modern art in the country.

In his elaborate discussion on the priceless artworks and aesthetics that the eminent art maestros have portrayed during their lifetime, Moinuddin Khaled described the individualism of the artists and how they solidified their legacies in the history of modern art as Bangladeshi artistic legends.

"Shilpacharya Zainul Abedin has cemented his legacy as the greatest artist of Bangladesh who got himself ecologically balanced in riverine Bangladesh, not in Kolkata or anywhere else under British India. He portrayed the nature of the Bengal through his imaginative inner eyes that explored more than outer vision," Khaled said defining the greatness of Zainul Abedin as the visionary artist.

Further explaining with example, Khaled said, "Many of us know about the infamous 1943 famine in the greater Bengal which happened due to the heinous acts of the British government, and we know about the havoc of that period because of Zainul's artworks which perfectly portrayed the social situation at that time."

"Through all his journeys in many countries and socializing with various types of people around the world, he portrayed the physical anthropology of human in his artworks. He mastered the cubic language of art through geometrized line-drawing. He used all his knowledge to establish the Dhaka Art School (now the Faculty of Fine Arts, University of Dhaka) and he was also a huge folk arts and crafts enthusiast and collector," Khaled added in his lecture on Zainul Abedin.

Talking about the artist known as 'Potua' Quamrul Hassan, Khaled said that people still fail to grasp the artist as not many of his artworks got exhibited. "Picasso was his idol, so his paintings have had similarities with Picasso, and the most important aspect of his paintings was his use of the metaphor - through which he channelled his protest against autocratic rulers like Yahya Khan before the Liberation War of Bangladesh."

On the legendary artist, SM Sultan who is known for his striking depictions of exaggeratedly muscular Bangladeshi peasants engaged in the activities of their everyday lives, Khaled said, "Sultan has always rooted for the idea of 'We' instead of 'I' - he was all in for portraying the togetherness of human beings. In his paintings, he unified the human species together through transcending the gender and societal barriers in society."

Calling Safiuddin Ahmed the 'Master of stylized art', Khaled praised his technique of using the geometric form in his line-drawings. "His paintings have synthesized graphics - I often feel his paintings have sound enabled, because of the graphical quality he portrayed."

Khaled said on Safiuddin:"To understand these factors and more behind their mesmerizing drawings and paintings, we need more sessions like this - and I thank the Cosmos Atelier71 for taking such initiative which is much needed to bring more image literacy among the audiences", Khaled said at the virtual edition of Cosmos Art Echo.