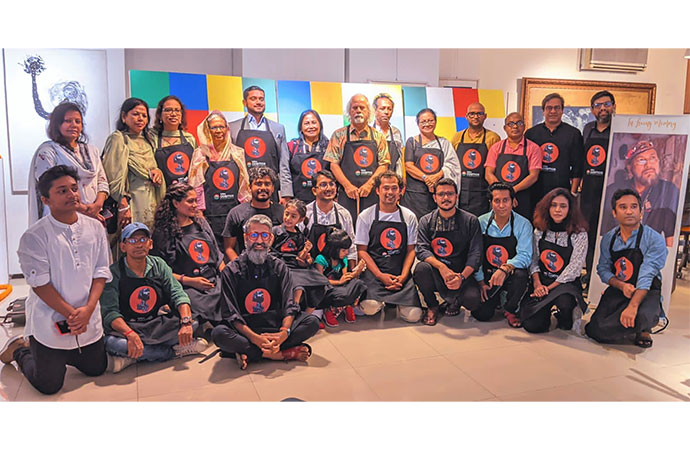 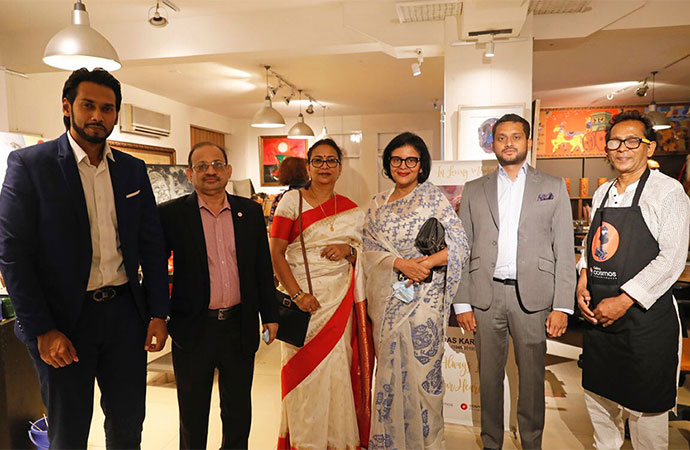 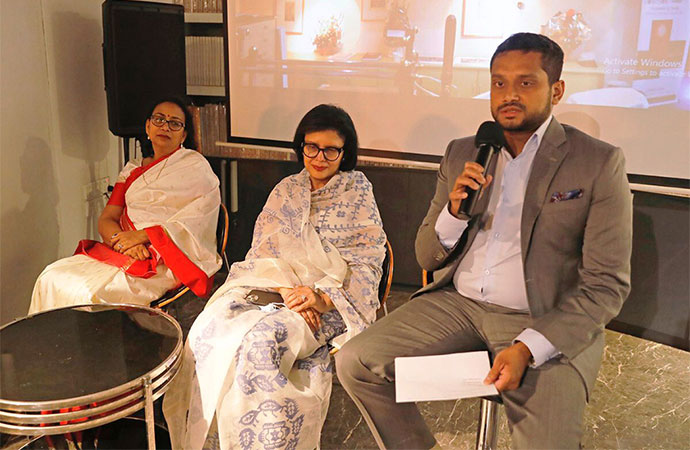 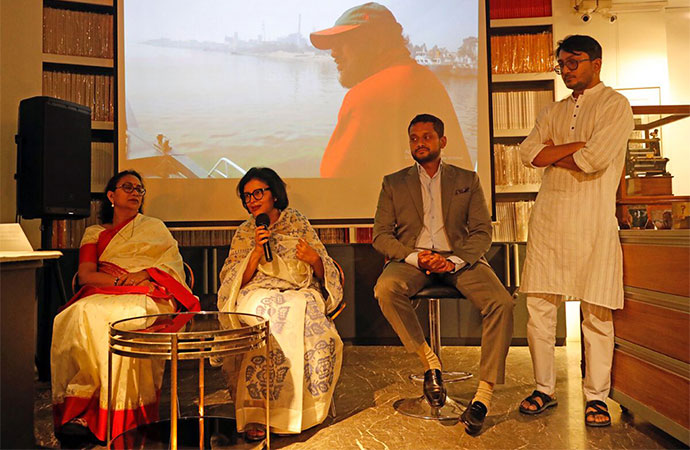 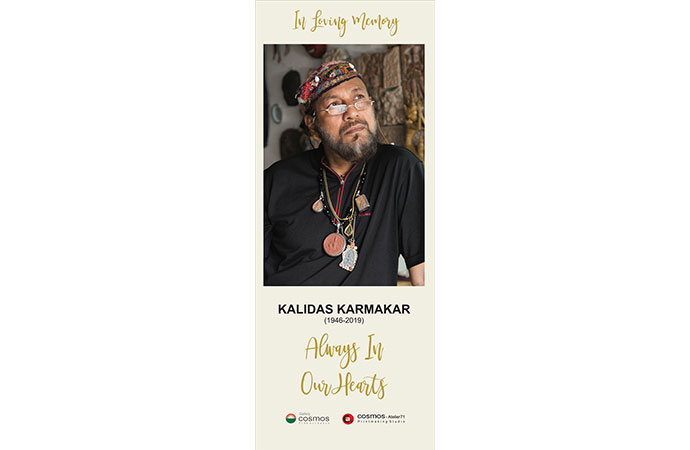 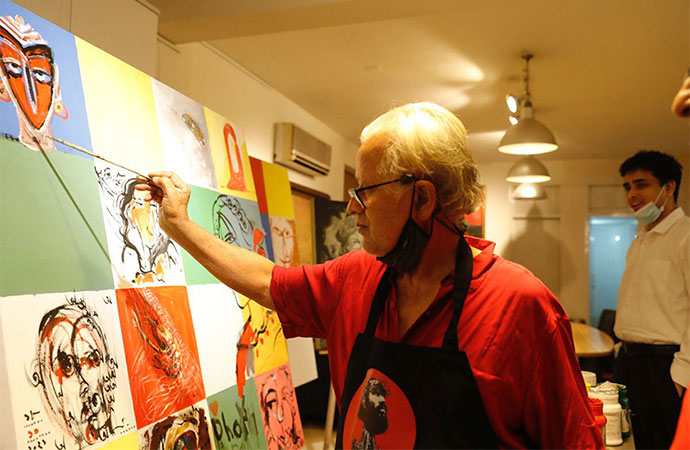 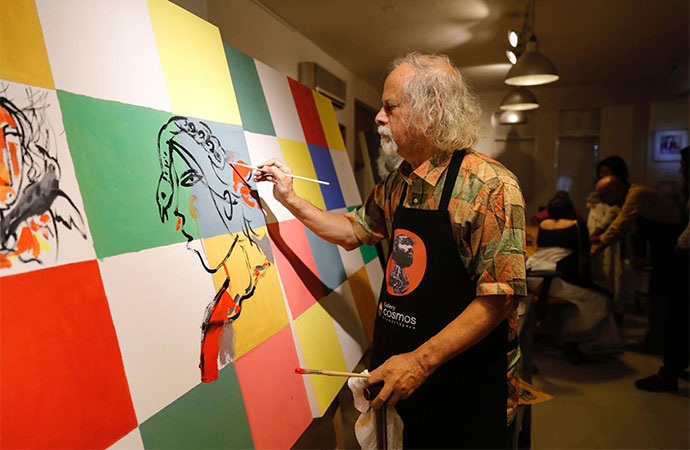 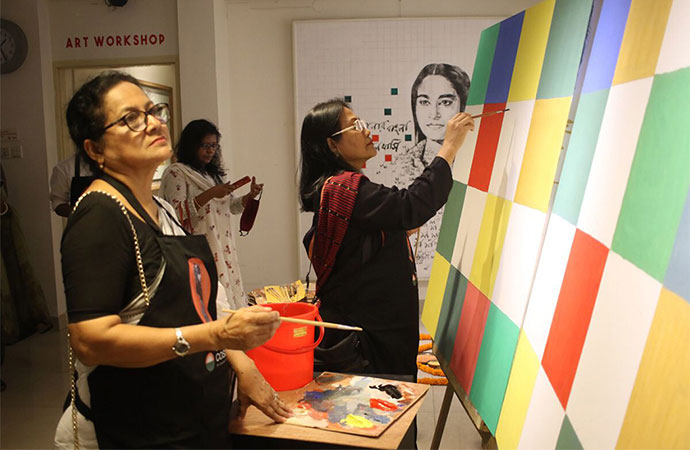 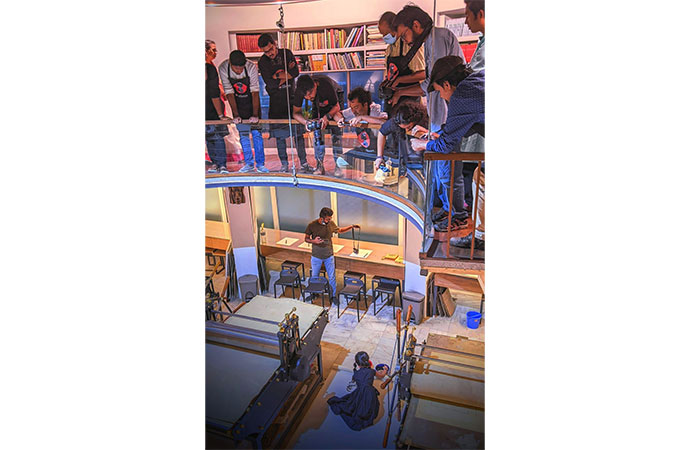 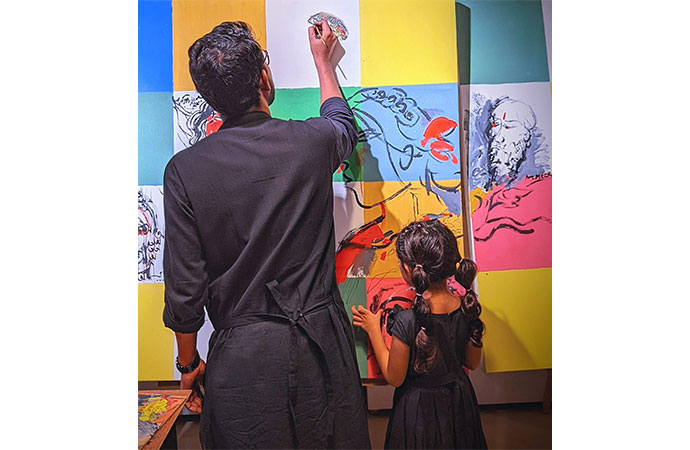 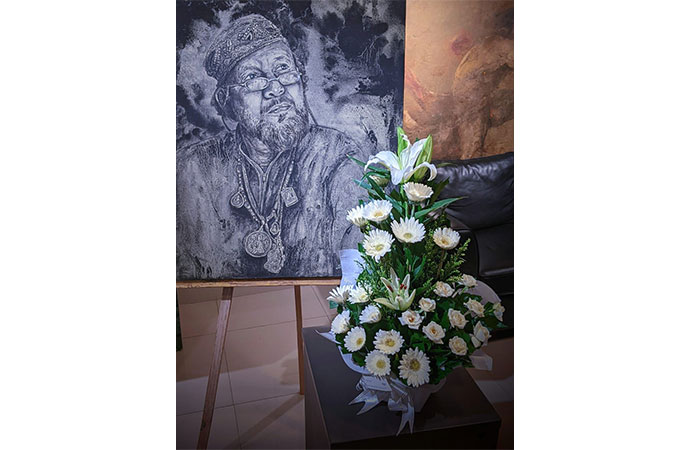 Ekushey Padak winning internationally acclaimed painter and printmaking artist Kalidas Karmakar, known for making significant contributions to the Bangladeshi art sphere through his majestic and fascinating artworks, was a lifelong friend and guardian angel for Gallery Cosmos and Cosmos Atelier71. Having the natural charisma of captivating the crowd, artist Kalidas Karmakar was famously known for often staging instant, enthralling performances during his solo exhibitions in Dhaka and abroad. Among countless of his memorable artistic ventures, there has been a highlighting performance at chars in the River Padma in the late 1980s which signalled the drift towards site-specific art in Bangladesh, something which was later followed by many fellow artists. He was one of the advisers of Gallery Cosmos, who initiated a modern state-of-the-art printmaking studio known as Atelier71 at the gallery venue in Cosmos Centre, Malibagh in the capital, for which he had always shown great dedication. He was engaged with the gallery till his death on October 18, 2019, following a heart attack. The eminent artist, 73, shocked the world with his sudden departure, leaving an irreplaceable void in million hearts.

Marking the second death anniversary of the eminent artist, Gallery Cosmos paid its heartfelt tribute by organising a day-long programme on October 18, Monday at Gallery Cosmos and Cosmos Atelier71 at the Cosmos Centre, Malibagh in the capital. From Morning till afternoon, several distinguished artists and admirers of Kalidas Karmakar joined the daylong event, participated in a vibrant discussion about the glorious life and majestic works of the great artist, created a collaborative painting on a vast canvas, observed the performance art done by little artist Borisho Dhora, in remembrance of the beloved soul - fondly addressed by everyone as the "Kali da".

Invisible, yet in fond memories

Artist Kalidas Karmakar was not only a magnificent artist who used to enthrall the audiences with his amazing performance arts and printmaking creations, but he was also a great companion to many. Throughout his life, he influenced and amazed a number of fellow artists and enthralled many with his charming personality and youthfulness. Dhaka Courier spoke to some of his admirers st the event, and dived into their memory lanes to know their experience about the alluvial man.

Sharing the fond memories, Masud Jamil Khan said, "Kalidas Karmakar has always been a family member, a guardian angel for our Gallery Cosmos and Cosmos Atelier71 from the very beginning. We deeply miss his presence here since his untimely departure, nonetheless, he is always with us spiritually, and we are proud to commemorate his legacy."

Echoing the same, Rubana Huq said, "Kalidas Karmakar was not just an artist; he was a friend, a mentor, an immensely creative and enlightening, vibrant soul. His name resonates with the English meaning of 'ink' - and through the inks and colours of his artworks, he will forever live among us."

Ambassador Tofail K. Haider said, "Kalidas Karmakar had always been a lively soul, and we shared many fond memories home and abroad. His sudden departure had deeply impacted me; that being said, he is always among us spiritually."

Ekushey Padak winning Bangladeshi art maestro Dr Farida Zaman shared her memories of the alluvial artist, saying, "Kali da always adored me as not only a senior artist, but also as an elder brother. He is from Faridpur, and he always used to mention the connection between my name and his home district. His flamboyant artistic style, his unique presentations and thought provoking artworks have always amazed me and the others."

Eminent artist, freedom fighter and longtime friend Biren Shome said, "He (Kalidas) was one of the most creative and flamboyant artists of Bangladesh, who was the living embodiment of freedom and free spirit. We have shared countless tremendous memories in our artistic journeys - and his energy was unfathomable."

And speaking of that energy, Executive Artistic Manager of Gallery Cosmos Sourav Chowdhury said, "Kali da had always been an energetic inspiration for us, the young artists. He was always full of vigour and vitality, and age was just a number for him. We are truly blessed to witness and experience his vibrant life and meaningful works, and he will remain in our hearts forever."

One of the finest and multi-diversified artists in Bangladesh, Kalidas Karmakar (January 10, 1946 - October 18, 2019) was awarded the Ekushey Padak in 2018 and the Shilpakala Padak in 2016 for his significant contribution to the fine arts sphere in Bangladesh. Being a specialized in viscosity printing, his diverse artworks featuring found objects, handmade paper, and oil on canvas prints have been widely exhibited and garnered critical acclamation throughout South Asia, Middle East, Europe, and the United States.

The artist's very first solo art exhibition was held at Bangladesh Shilpakala Academy on August 7, 1976. In 2006, he received an ACC Fellowship to participate in a residency at the PointB Worklodge in Brooklyn, New York, in the United States.

Marking the occasion, Gallery Cosmos and the family of the legendary artist jointly announced that from now on, two young and promising artists will be awarded the 'Kali Artist Residency Grant' worth Tk 2,00,000 and access to practice at the Cosmos Atelier71 for three months, along with all other facilities for three months.

Details regarding the grant can be found on the Gallery Cosmos Facebook page.

The deadline for the 'Kali Artist Residency Grant' for this year is October 30, 2021.

Puja attacks: Law and order is half the problem

Citizen&#39;s Platform for SDGs on Monday said the government&rsquo;s ...

As Musk buyout looms, Twitter searches for its soul