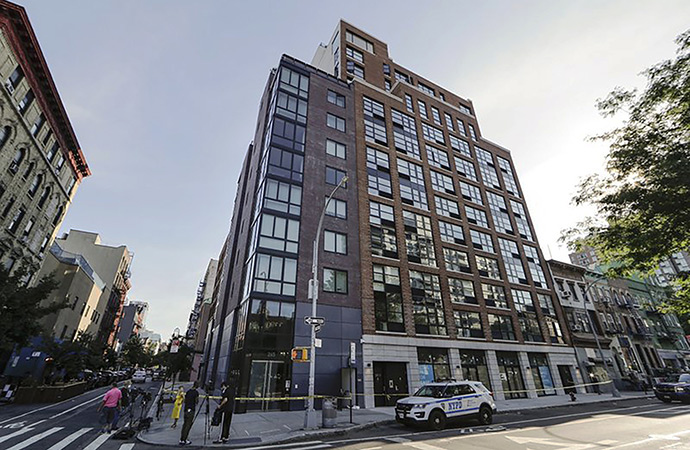 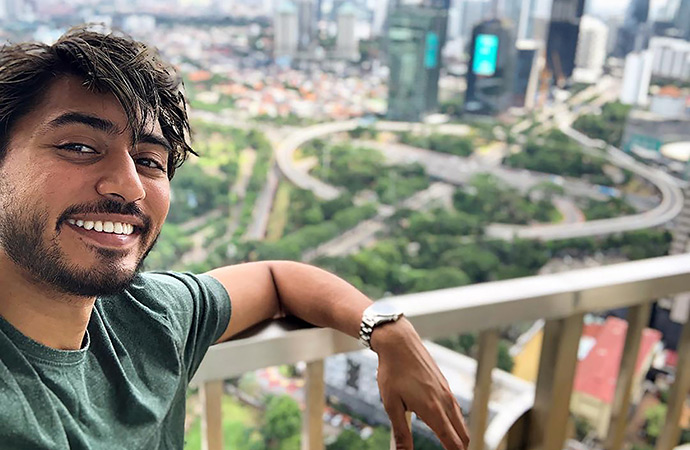 A New York Police cruiser is parked at 265 East Houston Street Wednesday, July 15, 2020, in New York. Police say the dismembered body of a 33-year-old tech entrepreneur has been found inside his luxury Manhattan condo. Fahim Saleh was found at around 3:30 p.m. Tuesday inside his apartment on the Lower East Side. Photo: AP/UNB

Fahim Saleh, tech entrepreneur and co-founder of Bangladesh ride-sharing app Pathao, was found dead at his apartment in New York this week.

Members of the New York Police Department (NYPD) recovered the dismembered body of the millionaire tech entrepreneur from his swanky Manhattan condo about 3:30 pm( local time) on Tuesday, July 14.

An electric saw lying next to the remains was also found, said police. Police made the grisly discovery in a building on E. Houston St. at Suffolk St. on the Lower East.

Saleh, a website developer turned venture capital, is the CEO of Gokada, a motorcycle-sharing company in Lagos, Nigeria. He bought the condo for $2.25 million last year.

In a chilling account detectives gave to the New York Times, the killer, dressed entirely in black and wearing a black mask, followed the young technology entrepreneur from the elevator of his luxury condo building into his apartment. Then he used an electrical stun gun to immobilize his victim.

Some time after, the assailant killed Saleh, decapitated him and dismembered his body with an electric saw.

The NYPD went to the seventh-floor condo after the victim's sister called 911. She came calling Tuesday because she hadn't seen her brother in a day, then discovered his dismembered corpse, an NYPD spokesman initially said.

Investigators later said they believe the killer's work dismembering the body was interrupted when the sister entered the apartment, according to the New York Times. Detectives think that the assailant fled through the apartment's back door and into the building's stairwell when she arrived.

Detectives took her to the 7th Precinct stationhouse Tuesday night, and ushered her away from reporters. The investigation included a review of surveillance video from Saleh's apartment building and an interview with his sister.

According to the Associated Press, the video showed Saleh exiting an elevator that leads directly into the full-floor, two-bedroom apartment earlier Tuesday afternoon closely followed by someone dressed entirely in black, including a mask, according to a law enforcement official who was briefed on the case. It also shows a struggle between the two ensuing at the entrance to the apartment, said the official, who wasn't authorized to discuss the investigation and spoke on the condition of anonymity.

Later, two of Saleh's friends, a man and a woman, arrived at the precinct to check on his sister.

They described him as a self-made millionaire who brought tech companies into nations like Nigeria and Indonesia, an energetic person who loved gadgets and video games.

Though they believe he was targeted, he never acted like he was worried about anything, the friend said."He never said he was scared," the male friend said. "[He was] always very happy-go-lucky."

They said he had just moved in recently to this apartment - somewhere around the end of 2019. Saleh posted a photo of his new home on Twitter in December. Investigators were exploring whether the killing could have been related to Saleh's business dealings. They also were checking security camera video from the neighborhood to try to locate the suspect.

A Police Department spokesman said he could not comment on a possible motive or whether any suspects had been identified.

Saleh described his history as an entrepreneur in a series of posts on Medium.com. He got his start creating a prank calling website, then moved on to create a motorcycle taxi company in his parents' native Bangladesh.

Most recently, he started Gokada, a motorcycle ride-sharing company in Lagos, but the company faced setbacks and mass layoffs after Lagos banned companies like his in January.

A rising star in business

Fahim Saleh had a knack for coding and developing apps from his early years. Born to Bangladeshi parents in Saudi Arabia, the 33-year-old created his first company while still in high school.

He went on to co-found Pathao, a ride-sharing company popular in Bangladesh and Nepal, in 2015. Fahim had recently helped found Nigerian motorbike taxi app Gokada, which faced a setback after authorities in Lagos banned motorbike taxis earlier this year.

The leading tech entrepreneur of international ride-sharing companies had much more to offer had his life was not cut short.

An investor that finds things - is how he described himself on Fahim Saleh LinkedIn.

The CEO and founder of Gokada, a motorcycle ridesharing company, had over 15 years of entrepreneurial experience, his bio reads.

Fahim's first company in high school generated over one million dollars in revenue. After college, he taught himself how to programme, and started KickBack Apps, garnering over 20-million downloads.

Roughly two years after co-founding Pathao, Fahim co-founded Gokada in Lagos, Nigeria in December 2017, and took over as its CEO in April of last year. Most recently, he oversaw Gokada's transition to delivery service during the coronavirus pandemic.

He also launched the venture capital firm Adventure Capital in New York in 2018.

"We used to call him the Elon Musk of the developing world," The New York Post quoted one of his long-time friends as saying.

"His best friend in Dubai called me just sobbing on the phone, 'They took my boy; they took my boy!' He played ukelele...he was so full of ideas," the friend added.

After graduating from Bentley University in Massachusetts, where he studied computer information systems, Fahim had early success with an app for making prank telephone calls, named PrankDial.

Fahim Saleh enjoyed what he did and loved working out.

Fahim was an optimist. "Have a very good feeling about 2020," he tweeted last month.

His final tweet was sent out on July 5 in which he held a poll asking how trustworthy of a brand would you say Gokada is compared to other Nigerian companies.

A long-time friend of his described him as "the Energiser bunny". His friends said Fahim was a self-made millionaire who had a passion for gadgets and video games.

Friends of Fahim have paid tributes to him saying: "He was extremely smart, ambitious, very kind. Always smiling."

He never said he was scared, one of his friends recalled. "[He was] always very happy-go-lucky."

He first started with a simple site for his family - Salehfamily.com - when he was in the eighth grade. By the age of 15, he began to develop a knack for programming and set up a blogging site just for his friends. The dotcom boom of the 1990 saw him become interested in programming and developing websites.

What started as a teen hangout (teenhangout.com), ended up turning into a blogging forum for the community as more people heard about the site and began to publish articles about Fahim Saleh, according to the Daily Mail.

A blog notes how at high school, Fahim Saleh was drawing a profit of between $100,000 and $150,000 a year as he created websites that focused on young people.

He attended Bentley University in Boston, Massachusetts where he studied Computer Information Systems and developed a Facebook app which allowed students to have food delivered.

He then set up a phone-pranking phone app that would let a user choose a prank call before calling up their friends to hear their surprised reaction.

What started off generating about $20 a day soon grew to $1,000. In an article for Medium, he recounted that PrankDial.com has generated $10million during its lifetime.

The website still brings in about $1-2million a year and allowed him to set up more companies: TapFury, an entertainment company, and Ninja Fish which had a focus on gaming.

He then set up a venture firm that would allow him to invest in startups in the developing world.

Fahim Saleh was found murdered at his apartment in New York on Tuesday. His gruesome death came as a shock for everyone.

Zunaid Ahmed Palak, the state minister for ICT, mourned, calling him a man with exceptional innovative mind. "He was an exemplary young man," Palak said.

"We've lost exceptionally talented young entrepreneur of international calibre in the tech sector," the state minister said in a message.

Tributes poured in from other parts of the world.

"Rest in peace Fahim Saleh. Deepest condolences for his family and friends. The world is becoming inhumane day by day," wrote Ashiq Rahman, a software engineer living in Toronto, according to the Daily Mail.

Abraham Ojes, another entrepreneur, tweeted: "Rest in peace Fahim Saleh. I'm writing this from a place of pain and loss. You were such an inspiration to me and my team."

Pathao, the company he helped co-found, said he would forever remain an incredible inspiration for them.

"Fahim believed in the potential for technology to transform lives in Bangladesh and beyond. He saw the promise in us when all we had was a common purpose and a shared vision. He was, and will forever remain, an incredible inspiration for Pathao and our entire ecosystem," said Hussain M Elius, co-founder and CEO of Pathao.