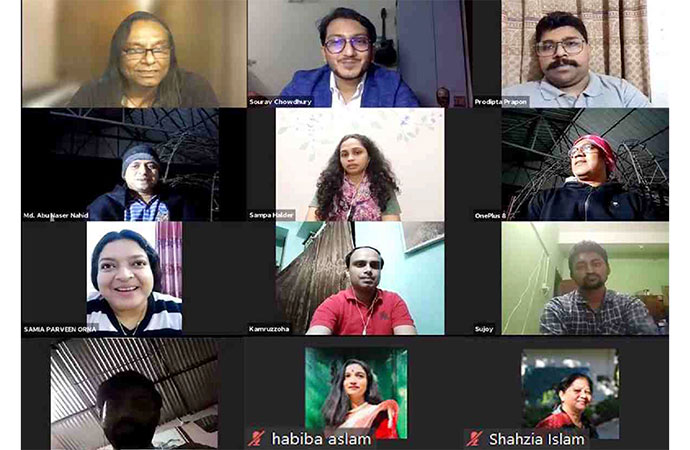 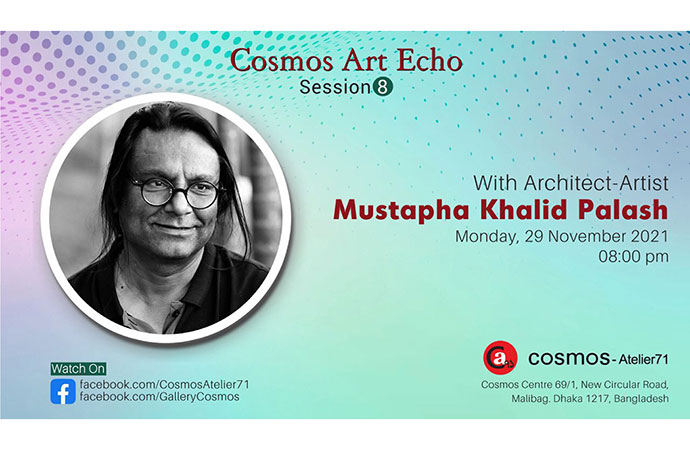 To create any beautiful artistic work, one has to search and extract the truthfulness out of nature and elements, as true beauty relies on truth and vice-versa, said award-winning Bangladeshi architect, artist, multi instrumentalist-singer and painter Mustapha Khalid Palash at 'Cosmos Art Echo: Session 8' on Sunday.

"As an artist, I always believe that beauty relies on truth. If you are truthful in your works, you will find joy and success in your creations and the overall creative process. The current world is highly materialistic so sometimes we go through roadblocks in our creative process, but your commitment towards your creation and your truthfulness will guide you towards success," Palash said at the event.

Hosted by Gallery Cosmos and Cosmos Atelier71 Executive Artistic Manager Sourav Chowdhury, the virtual art talk shed the spotlight on the eminent artist and educator, who shared his iconic and highly successful journey for the enthusiasts and the participants of the Cosmos Atelier Membership Project.

One of the most prominent names in Bangladesh's current architecture scene As the Principal Architect and Managing Director of Vistaara Architects [Pvt] Ltd, he and his team have been elevating the megacity of Dhaka for the last two and a half decades by building attractive, sustainable, and functional architectural marvels one after the other.

"Art deals with illusion, Sculpture deals with volume and Architecture deals with space," Palash said. "As human beings have so many other organs and a 'soul,' a building is also not only some materials-based structure but also has its own uniqueness, which an architect must learn to understand."

Speaking of his monumental creations, Palash shared how hard the journey was back in the days when technology was not improved in comparison to the current scenario. "When I got the offer from the Bashundhara City authority to make that gigantic shopping mall, I was just 35 years old and was teaching at BUET. The offer came to me after going through the brochure of the Unique Trade Centre (UTC), also designed by me, and then they demonstrated what the mall should look like. It seemed highly impossible at first, then we travelled to other monumental shopping places across the world before starting the construction."

"We finally completed Bashundhara City in just four years, without any error in the making. And that too at a time, when technology was not that much available like we see nowadays. I used to work on an Intel Pentium-based computer, a 33 Megahertz PC; and now I am using a 5 Gigahertz PC. If we wanted to print out a render then it would take the entire day - and one can assume how poor the quality was. So you see the differences," Palash explained.

He received the Habibur Rahman Award for excellence in design after graduating from the Department of Architecture at Bangladesh University of Engineering and Technology (BUET). He began his career as a practising architect before becoming a faculty member at BUET's Department of Architecture. In 1998, he left BUET as an Assistant Professor to start his own company, Vistaara Architects.

Palash has also taught as a visiting faculty member at a number of universities, including North South University, BRAC University, University of Asia Pacific and more. In 1995, he obtained architectural instruction through a grant from the renowned architect Tadao Ando.

Three of the premium telecom companies' headquarters - GP House, Robi Headquarter, and the Banglalink 'Tigers Den', are also made by his design. "Grameenphone's Bashundhara headquarter GP House is the first sustainable, green office in Dhaka, made by European standard," he said at the event.

A visual artist by passion, Palash participated in several group painting exhibitions. He had his first solo painting exhibition in 1978, and then his solo exhibitions were organized in 2009, 2011, and 2013. He received the Shilpacharya Zainul Award for his paintings in 2012, and his art space Dhaka Gallery is one of the blooming art places in the city.

Also an avid sitar player, Palash has voiced several Rabindra Sangeet albums, published from Bangladesh and India. He is the Editor of quarterly DOT, the only magazine on architecture in Bangladesh. Palash's works have been featured in several national and international magazines, including the famous McGraw-Hill publication.

He received several national and international awards, including the IAB Design Award 1998, Architect of the Year 2005 (India), Berger Award for Excellence in Architecture 2007, Holcim Green Built Bangladesh Prize 2010 and more.

Renowned late artist Afroz Mustapha was his mother and celebrated elocutionist Shimul Mustapha is his younger brother, and Palash's wife Shahzia Islam Anton is also an architect, singer and co-founder of Delvistaa Foundation.