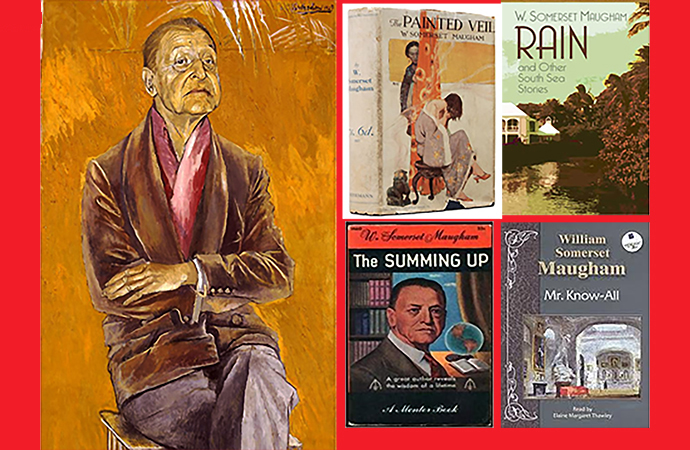 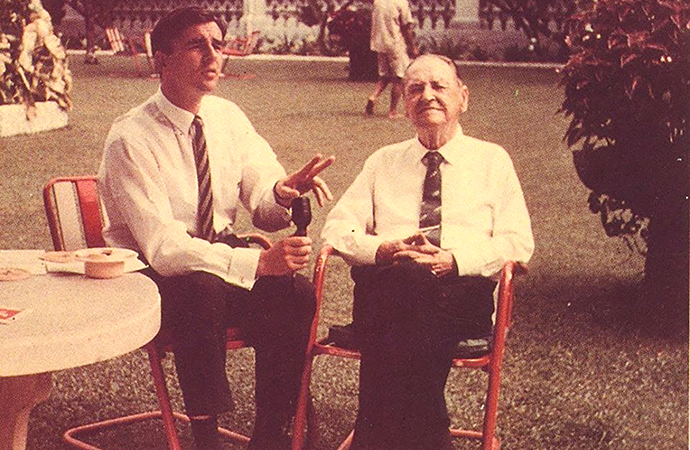 In 1921, Somerset Maugham made the first of his many visits to Raffles Hotel. He used to spend his mornings under a frangipani tree in the Palm Court being inspired by the conversations taking place around him. (courtesy Facebook)

William Somerset Maugham was already an established author when he began to focus on short stories. His interest in this genre was actually meant to have been a form of relief from novel-writing, but interestingly it was this literary form that rendered him more famous in the East. Though intensely English in attitudes and behaviour, he was not quite a 'legit Brit'. Born in Paris (in 1874), he learnt to speak in French before he spoke English, spent some time studying at Heidelberg Germany, before continuing further education in England, then settled down in the south of France. Having written a few novels, he turned to short stories. Perhaps due to his cosmopolitan exposure, he was deeply influenced, in his short stories, by foreign writers. In particular, the Russian author Chekov and the Frenchman Guy de Maupassant.

He admired Chekov's markedly superior characteristics, but was more approving of Guy de Maupassant. From the Frenchman, Maugham learnt not just to copy life in his tales, but also to dramatize, interest, excite and surprise the reader. Maugham thought Maupassant gave his stories a beginning, a middle and an end, a discipline that pleased him enormously. He declared that his prepossessions in the arts were on the side of law and order.

Maugham's style was as ordered as his general plan. His language was simple and mellifluous. He liked to describe at length, almost exasperatingly so, but later corrected himself. His sentences were short. They balanced one another and were balanced in themselves. The wry sense of humour was pervasive, tempered by astringent cynicism. His writings had the requisite elements of character, emotion, and often an interesting cultural milieu. He used minimum of ornamentation in his prose, concentrating unflinchingly on the narrative line. He introduced readers to 'shades of grey' in life. His characters have streaks of virtue and vice that interplay in the narrative. His plots were compact. He thought the writer should need to prove nothing. Only paint a picture and leave it before you. You could take it or leave it. Most took it.

His philosophy in life was discernible in his "The summing Up'. It was one of resigned atheism and certain skepticism about the extent of man's innate goodness and intelligence. In a very English fashion he understates his own profundity. He said: "I have never been anything but a story- teller; It has amused me to tell stories, and I have told a good many".

Unlike his fellow Englishman, Rudyard Kipling, he held no brief for England's imperial aspirations. In stories such as the "Rain" he comes through as an incisive allegorical critique of the white man's colonial impulses. Maugham added a touch of the exotic oriental mystique as a backdrop to this tale of a white missionary's fallibility. It was in the form of the incessant rain that continued to pour down with relentless force, unlike the light English drizzle ,as the story unfolds, symbolizing a pathetic fallacy that foreshadows a tragedy (the missionary's suicide). Like many of his ilk in his time in Victorian and Edwardian England, he reached back to classical Greece for some of his techniques. A key one was 'Anagnorisis', a Greek word which translated into English means "recognition". This is a moment in the unfolding of a tale that one character, oftentimes the hero or heroine suddenly recognizes another as being different from how he or she was initially perceived. As can be seen in his "Mister Know-All".

Maugham first came to Singapore in 1921. He kept on coming back for four decades till a few years before his death (he died in 1965). He lived at the 'Raffles Hotel' which is still a landmark in the island Republic. He sat beneath a fragrant frangipani tree in the hotel's' Palm Court' and crafted stories from tidbits of gossip overheard while dining with the local gentry. These men and women lived in rubber plantations of the Malay Straits, and had impeccable manners, afternoon teas, and evening cocktails of gin and tonic and the 'Singapore Sling'. Often, they had deeply flawed human character, a treat for the observant writer. This was much like in the tea gardens in our parts, in Sylhet or in Darjeeling, which also inspired a contemporary Indian, Mulk Raj Anand, perhaps India's first prominent English novelist.

In Singapore, British colonialism was spread more by the pen, rather than by the sword. Which is perhaps why, as the city was about to fall to the Japanese during World war II in 1942, Singaporeans made their "last stand" at the 'Raffles', not to fight, for they had already surrendered, but to sing the strains of "there shall always be an England, and England shall be free". Maugham has at times used the term "Bengali" while describing the man on the street in Singapore. However, this "Bengali" was not necessarily a Bengali-speaking person, for those days it referred to anyone in Singapore coming over from Calcutta by ship, mostly Sikhs. The Tamils, on the other hand, came separately from Madras. Indeed, Singapore from 1830 to 1867, with the rest of the Straits, formed a part of the Bengal Presidency and was ruled from Calcutta. This is evidenced even at present in the architecture of many of the older buildings in the central parts, as also in names like 'Victoria Hall', 'Clive Street' or 'Outram station'. Netaji Subhas Chandra Bose issued his clarion call for India's freedom-struggle from Singapore, through his famous address while launching the Azad hind Fauj:"Tum mujhe khoon do , mein tumhe Azadi dunga"! (You give me blood, and in return, I shall give you freedom!)

I want to make an important point here. From the very beginning, as a part of national strategy Singapore has sought to weave its British intellectual heritage with its Chinese-Malay-Indian ethos. This it has done in order to create a cosmopolitan backdrop, and also retain the past western linkages, (one reason why Sir Stamford Raffles rather than a local was 'selected' to be the 'Founder' of Modern Singapore) to facilitate its current role as a global financial and knowledge hub. To that perhaps, is also owed the fact that the National University of Singapore (NUS) is rated as Asia's foremost citadel of learning. It has also helped the overwhelmingly Chinese city de-emphasize any ethnic nationalist tendencies, and successfully build a harmonious relationship with the other two communities, the Malays and the Indians. Also to create a separate identity, distinct from the origin of its majority population, which is why, today, as the world is being increasingly dichotomized between the two powers, the United states and China, Singapore is still able to deftly navigate between the proverbial Scylla and Charybdis.

Dr Iftekhar Ahmed Chowdhury is Principal Research Fellow at the Institute of South Asia Studies, National University of Singapore. He is a former Foreign Advisor (Foreign Minister) of Bangladesh and President of Cosmos Foundation Bangladesh. The views addressed in the article are his own. He can be reached at: isasiac @nus.edu.sg

Why public financial intelligence would trump the FI ...