In a horrific instant, a burst of power that ravaged Beirut 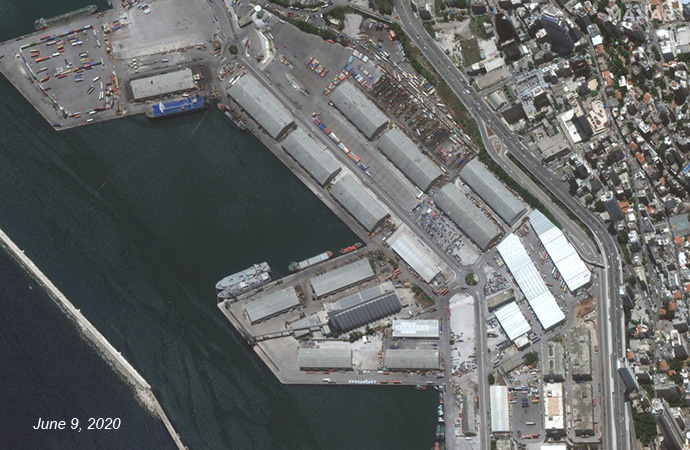 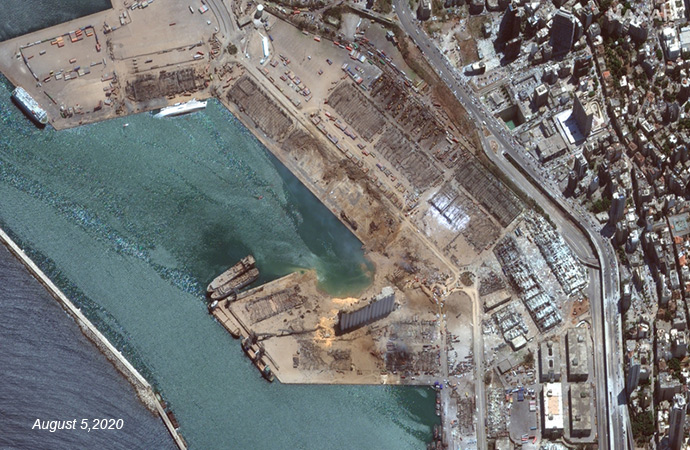 As black smoke billowed into the sky, Shiva Karout stepped out of his gym with his colleagues and customers to watch. His gym, Barbell House, sits just across the coastal highway from Beirut's port where a fire raged. They were curious.

Then a first boom shook them, and curiosity turned to fear realizing how close they were. "We got a bit scared, and we all went back in," Karout recounted. Tense moments passed, waiting inside, and one of his customers panicked and ran out. Karout went after him.

That was when hell erupted. A gigantic explosion threw up a towering mushroom cloud and sucked out the air, and a wave of destructive energy shot across Lebanon's capital.

The force threw Karout to the ground. He was cut and bruised, his full arm and leg tattoos of the Hindu god Shiva, after whom he is named, were punctured with lacerations and clotted blood.

But his gym - and everyone still in it - took the brunt of the blast. It smashed out the windows, knocked holes in the walls. Blood now stains the welcome counter. One of his clients took a major head injury and lies in a coma in a hospital and nearly a dozen others sustained medium to serious injuries.

That flashing instant, when a heavy fire on the horizon turned into an unimaginable burst of megatonnage, united Beirutis in a shared trauma and on Wednesday, the day after, they were still reeling with it and its aftermath.

In multiple videos posted on social media, whether shot from high-rise balconies or nearby streets, that instant hits with the same blunt force: Rising black smoke, then a sudden freight train of dust and pink smoke that barrels across the city at the camera and sends it - and whoever holds it - tumbling amid wreckage and confusion.

As the initial pall of smoke rose Tuesday afternoon, a team of 10 firefighters raced to the Port of Beirut to put out the fire raging in Warehouse 12, one a row of warehouses by the water's edge next to the port's large grain silo.

"They went down, thinking it was caused by fireworks," one firefighter named Freddy said of his colleagues who first responded. He asked to be identified only by his first name to speak freely to the Associated Press about the events still under investigation. Pops and flashes lit up the smoke, and it was reported the initial fire set off a stash of fireworks stored there.

The team was at the epicenter when, at around 6:05 p.m., the giant explosion blasted a crater into the port and turned every building around to twisted metal . It is under investigation whether the fire touched off the cargo of 2,750 tons of ammonium nitrate - a highly explosive component of fertilizers - that had been stored there since 2013.

Freddy and the second team of firefighters arrived about 20 minutes later. They each took a section of the port. For the next 24 hours, they pulled out bodies - Freddy said he found 10 - but only one was of their fellow firefighters, Sahar.

"We were looking for our friends but there were also lots of people dead," he said, standing at the main road, covered in soot and his face darkened with dust, smoke and sorrow. "It is total destruction inside. Nothing is where it should be."

His eyes welled with tears at the thought of losing his colleagues and his city. Lebanon is used to destruction, but not like this. "Not a house on the coast has not been damaged," he said.

At least 130 people were killed and more than 5,000 wounded, and elegant stone buildings, fashionable shopping districts and long stretches of the famed seaside promenade were reduced to rubble in the blast.

On Wednesday, Beirutis searched for missing relatives and bandaged their wounds. They surveyed damaged homes, assessing if they could stay in them, retrieving what possessions they could and searching out places to stay.

"We don't deserve this," said Riwa Baltagi, a 23-year-old who was helping friends retrieve valuables from their demolished homes.

The sound of ambulance sirens and the crunching of broken glass could be heard everywhere. Furniture and cushions were strewn along streets covered with wreckage. Elevators were dislocated from their shafts. Cars were crushed under the weight of debris.

Some of the worst damage was in the leafy neighborhoods of Mar Mikhael and Gemayzeh in east Beirut, where the blast damaged some of the few historic buildings that survived the 1975-1990 civil war. Balconies had dropped to street level, where bars and restaurants were buried and chairs and tables turned upside down.

The stench of alcohol from broken bottles filled some narrow alleys, as if the neighborhood's late night parties had turned bad. Nuns toured the churches along the streets, offering prayers and help. Supermarket owners filled plastic bags with the few remaining products in good shape- one saying he will take what is left home to use before it rots in the summer heat.

"I have nowhere to go," a woman said as she wept in what remained of her home in Gemayzeh. "What am I supposed to do?" she screamed into her mobile phone.

Throughout the night, radio presenters read the names of missing or wounded people. An Instagram page called "Locating Victims Beirut" sprung up with photos of missing people. Another account helped to connect the newly displaced with hotels and homeowners who were willing to host them.

Hospitals, already struggling with the financial crisis and coronavirus pandemic, were overwhelmed by the wave of injured. Many patients had to be treated in hallways and parking lots once the wards filled up.

Karout, the gym owner, said a "complete mess" followed the initial shock of explosion. Three hospitals in the area were in the orbit of the blast and were put out of service, unable to offer treatment. Others were unable to help. "They are not equipped for such things," he said. "We are not equipped."

Now he mourns the fate of Barbell. The blast has destroyed what he said was the fruit of years of "really hard work."

At least four Bangladeshi citizens were killed and 21 members of Bangladesh Navy injured in a massive explosion that rocked Lebanon's capital Beirut on Tuesday.

The Embassy also urged all to inform it through its hotline number if they come to know of any more casualties.

Some 1,50,000 Bangladesh nationals work in a number of sectors in Lebanon.

A look at some deadly explosions involving ammonium nitrate

The investigation into an explosion in the harbor of Lebanon's port city of Beirut is focusing on how 2,750 tons of ammonium nitrate, a highly explosive chemical used in fertilizers, came to be stored at the facility for six years, and why nothing was done about it.

The explosion Tuesday blasted a crater into the port and hit the city like a freight train, killing more than 100 people and injuring thousands. Buildings were damaged for miles around the city. Some other recent deadly explosions involving ammonium nitrate:

April 17, 2013: A fire intentionally set at the West Fertilizer Co. facility in West, Texas, caused ammonium nitrate to ignite, triggering a massive explosion that killed 15 people, injured at least 236 and left part of the small town in ruins. The fire ignited in a seed room and quickly engulfed an area where ammonium nitrate was stored in wooden containers.

April 22, 2004: An explosion in the North Korean town of Ryongchon, near the border with China, killed 161 people and injured 1,300. It was believed to have been sparked by a train laden with oil and chemicals hitting power lines. North Korea blamed the explosion on "electrical contact caused by carelessness during the shunting of wagons loaded with ammonium nitrate fertilizer."

Oct. 12, 2002: A series of nightclub bombings on the Indonesian island of Bali killed 202 people, mostly Western tourists. According to investigators, the primary ingredient of the main bomb that tore through the popular Kuta nightclub district was ammonium nitrate.

Sept. 21, 2001: A chemical plant explosion in Toulouse, France killed 31 and injured some 2,000. A 2006 report by judicial investigators blamed the blast on negligence that allowed ammonium nitrate to come into contact with other chemicals in the AZF plant, a subsidiary of oil giant Total.

April 19, 1995: The deliberate explosion of a 4,800-pound (2,200-kilogram), fertilizer-and-fuel-oil bomb in a rented Ryder truck parked outside the Alfred P. Murrah Federal Building in Oklahoma City killed 168 people and injured more than 500. Ammonium nitrate was found to be the main ingredient. Hatred of the federal government motivated former Army soldier Timothy McVeigh and his co-conspirator, Terry Nichols, to commit what many experts still refer to as the deadliest act of domestic terrorism on U.S. soil.

1.
In a horrific instant, a burst of power that ravaged Beirut
2.
Beirut Blast: Beyond Belief
3.
'End of the world': Countdown to Beirut's devastating blast
4.
Lebanon: Recollections

Pinar Gültekin and what #ChallengeAccepted was meant ...