Sprouting in the Desert: The venues for Qatar 2022 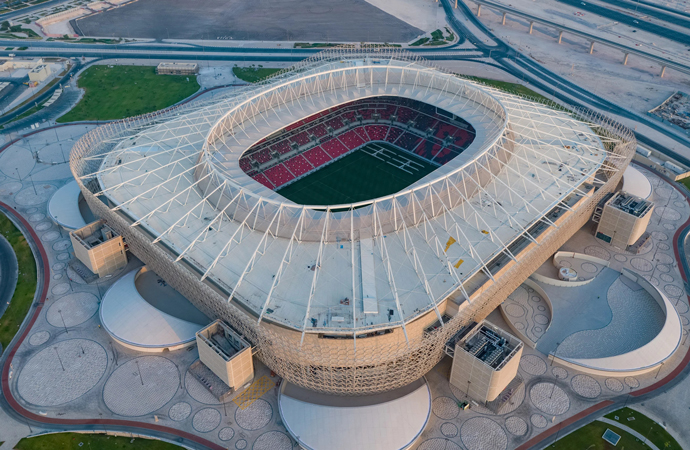 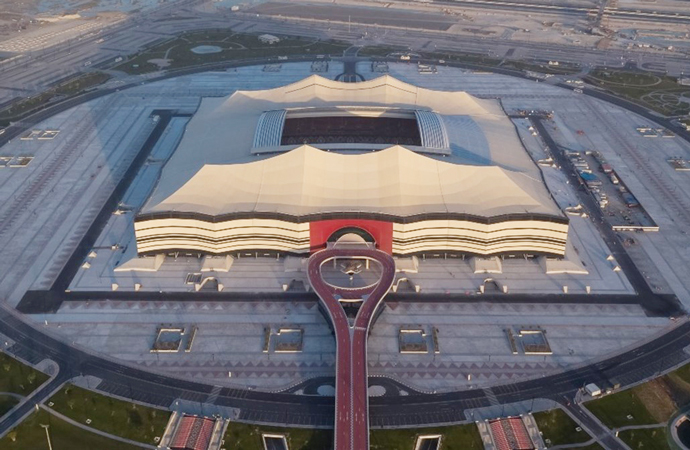 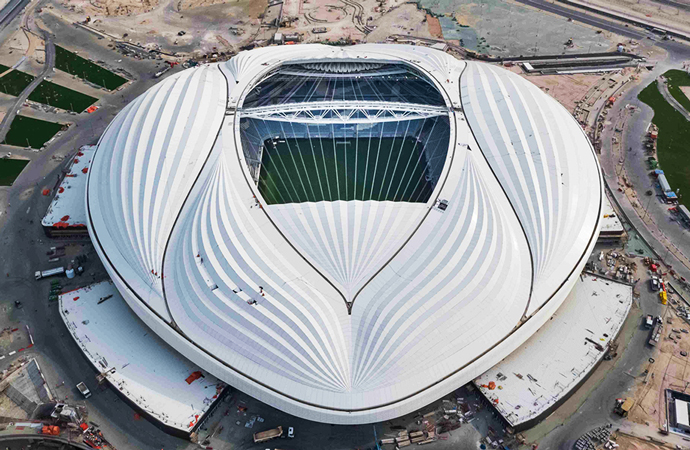 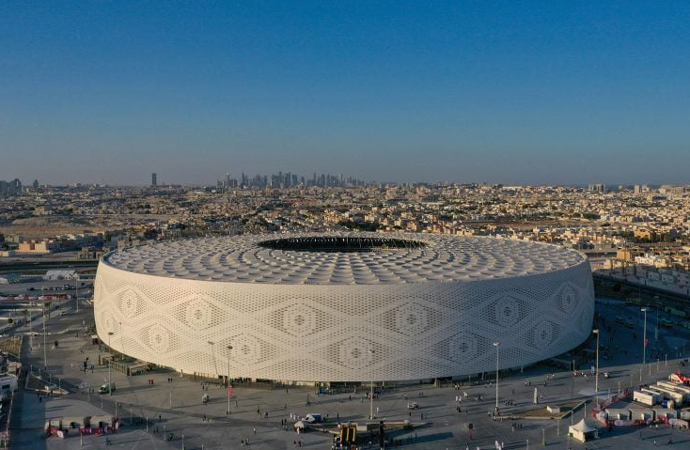 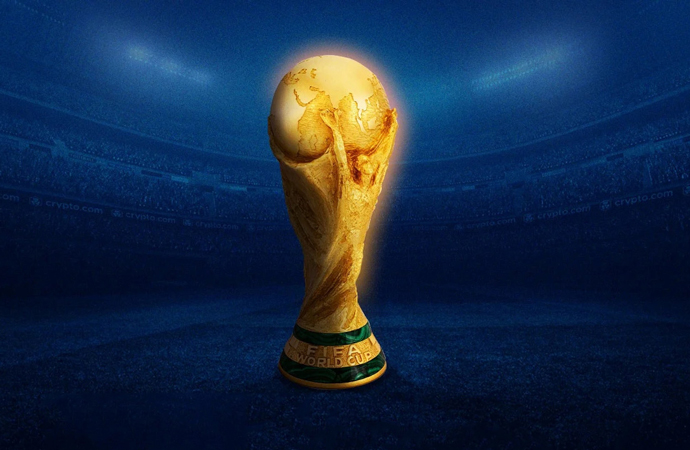 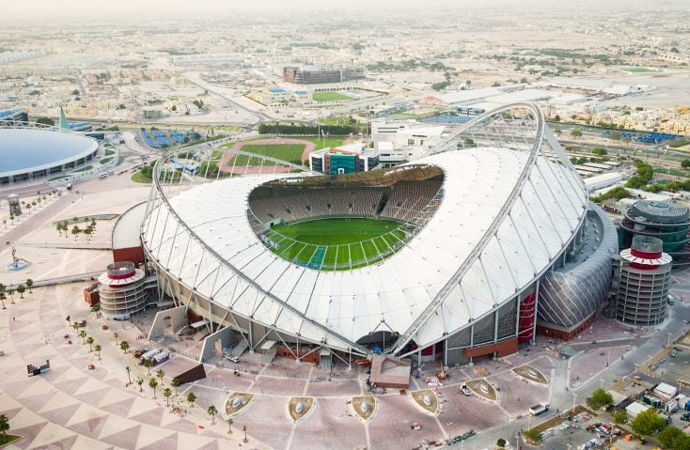 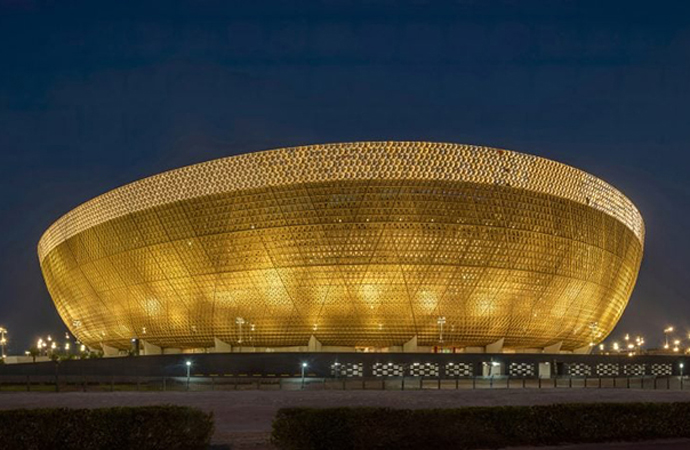 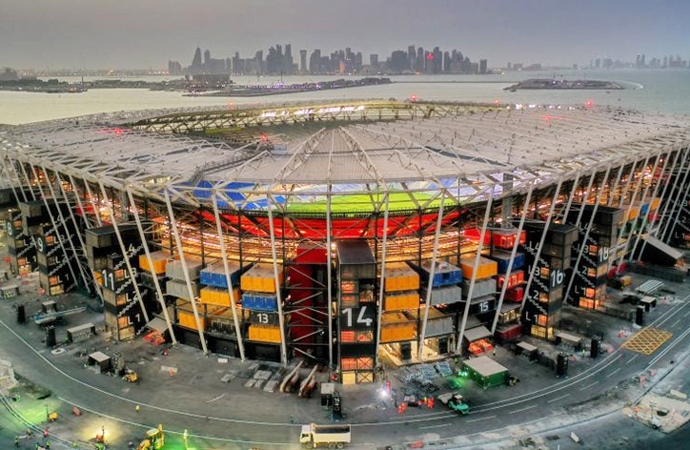 The eight stadiums that will be hosting the FIFA World Cup 2022 in Qatar were all mostly built from scratch, include a hat-shaped building and a "diamond in the desert".

All located in and around the Qatari capital city of Doha, the eight stadiums will be the backdrop to the international football tournament that runs from 20 November to 18 December.

Among them is Qatar's revamped national stadium, as well as a series of new structures by the likes of British studios Zaha Hadid Architects and Foster + Partners.

Since Qatar won the right to host the 22nd FIFA World Cup in 2010, the construction of these stadiums has been highly controversial.

According to the Guardian, more than 6,500 migrant workers have died in the tiny Gulf state over the past decade. Amnesty International said many of these deaths remain uninvestigated.

Event organisers have also come under fire over Qatar's claim that the tournament will be the "first carbon-neutral FIFA World Cup in history", which has been labelled as "far-fetched".

Islamic bowls and local Qatari architecture informed the design of the largest 2022 FIFA World Cup venue, which its architect Foster + Partners has likened to a "golden vessel".

The Lusail Stadium contains 80,000 seats that are arranged over two tiers and concealed by a curved exterior of golden, triangular panels mounted on a steel frame.

Structural engineer Arup and sports architecture specialist Populous also worked on the design for the venue, which will host its first match on 22 November and the final on 18 December.

Stadium 974 is named after Qatar's international dialling code, as well as the number of shipping containers used to build its staircases, kiosks, bathrooms and parts of its exterior.

Designed by Fenwick-Iribarren Architects, the colourful building pays homage to Qatar's maritime history as well as the industrial heritage of its site near Doha's port.

The containers, many of which were originally used to transport materials to the site, feature alongside a modular steel structure that was developed to be demounted and repurposed. The 40,000-seat venue will host its first match on 30 November.

To the south of central Doha in Al Wakrah is the Al Janoub Stadium, a building featuring the signature sweeping forms of its co-architect Zaha Hadid Architects.

The 40,000-seat venue, which will host its first match on 22 November, was created in collaboration with AECOM and features a fully retractable roof to help keep players and fans cool.

Its distinctive form is intended to resemble the sail of a dhow - a traditional fishing boat seen in the city's harbour - but critics have previously compared it to female genitalia.

Following the tournament, the stadium will become the home of the local Al Wakrah Sports Club football team.

The only existing building repurposed for the 2022 FIFA World Cup is the national stadium of Qatar, located 10 kilometres from Doha's city centre.

Named the Khalifa International Stadium, it was recently overhauled by its original architect Dar Al-Handasah to increase its capacity to 40,000, bringing it up to FIFA standards.

Before the tournament, the stadium was host to events including the Arabian Gulf Cup and the Asian Games. Its first World Cup event will be on 21 November.

Other recent alterations to the building since it was inaugurated in 1976 include the addition of a canopy that the arches over its roof, as well as contemporary digital lighting.

The multidisciplinary studio Dar Al-Handasah also created the tent-like stadium in Al Khor, which will host the football tournament's opening game on 20 November.

Named the Al Bayt Stadium, its design references traditional bayt al sha'ar tents that were used by nomadic people across the region. Inside, it contains 60,000 seats over four stands.

Its distinctive peaked form is achieved with a polytetrafluoroethylene (PTFE) woven fibreglass membrane and incorporates a retractable roof that complements the stadium's cooling technologies.

After the World Cup, its top tier of seating will be removed and used to help build sporting infrastructure in other countries, before a luxury hotel is built in its place.

A traditional gahfiya cap worn by men throughout the Middle East was the reference for the circular Al Thumama Stadium by Qatari architect Ibrahim M Jaidah.

Located to the south of Doha, the stadium has a circular form containing a concrete bowl with 40,000 seats for spectators and will host its first match on 21 November.

According to the architect, its unique design has a functional purpose too, protecting spectators from the sun "in a similar way to how the gahfiya is used to cover one's head from the heat". This will work in tandem with a cooling system powered by solar energy.

A boutique hotel is also planned to be built in its upper tier following the event, with rooms facing onto the pitch.

UK architecture studio Pattern Design and engineering firm Ramboll designed this decorative stadium on the edge of Doha to serve as a "marker of your exit and return to or from the desert".

Named Ahmad Bin Ali Stadium, it is distinguished by its ornate metal exterior that references traditional Qatari facades called Naqsh, which is juxtaposed by solid concession stands around the edges that nod to the neighbouring sand dunes.

Like all the venues used for the tournament, the open-air pitch will be artificially cooled to ensure the comfort of players and its 40,000 visitors. The first game here takes place on 21 November.

Dubbed a "diamond in the desert", the Education City Stadium is the eighth and final venue for the 2022 FIFA World Cup Qatar. Its first match is on 22 November.

The stadium's nickname refers to its facade, which is composed of a diamond-like pattern that takes its form from traditional Arabic architecture. It is designed to deflect strong sunlight and can be illuminated at night.

After the games, there are plans for the venue to be converted into a sports hub for the Education City district where it is located, with its top tier of seating removed to make room for university classrooms and event spaces.