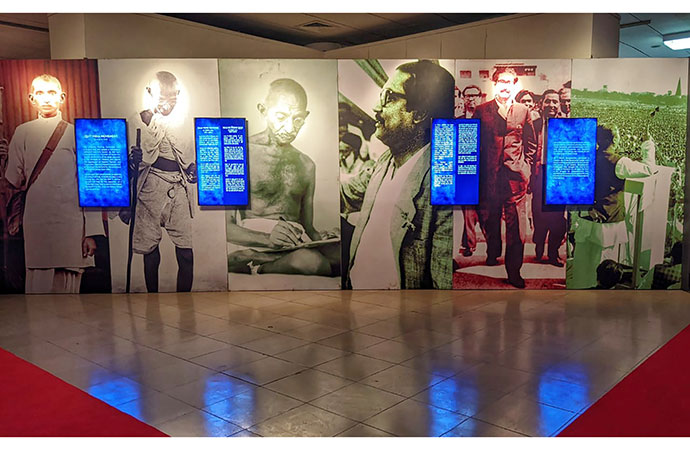 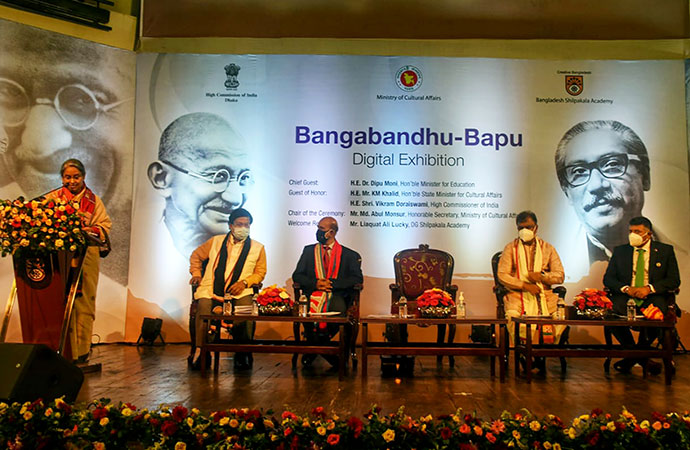 Upholding the glory of the bilateral relationship between Bangladesh and India, the High Commissioner of India in Dhaka Vikram Doraiswami stated on Saturday that Bangabandhu Sheikh Mujibur Rahman and Mahatma Gandhi, the fathers of the two nation, shared similar political philosophy and ideology during their individual journeys.

The Indian High Commissioner made the remarks at the inauguration ceremony of Bangabandhu-Bapu Digital Exhibition at the National Art Gallery of Bangladesh Shilpakala Academy (BSA) on Saturday.

"This unique, interactive digital exhibition commemorates not just Bangladesh's 50 years of Liberation, but this also commemorates the striking similarities between the two great leaders. This exhibition showcases their struggles in their individual journeys and their history-making political philosophies that led the creation of two nations - India and Bangladesh," the Indian envoy said in his speech as the guest of honor.

He added, "This is a very special moment for us to open the exhibition for the public after the lockdown restrictions of the ongoing pandemic, and we look forward to our friends from Bangladesh and India to visit the exhibition and explore the two iconic leaders' lives and journey through the power of interactive multimedia."

Thanking India for arranging the exhibition, Dr Dipu Moni said, "Bangladesh and India have always shared strong mutual friendship and bilateral relationship, rooted from the greatness of our Father of the Nation Bangabandhu Sheikh Mujibur Rahman and India's Father of the Nation, Mahatma Gandhi. This interactive exhibition is just another example of this wonderful relationship, showcasing the eventful journey of two iconic leaders."

This unique digital exhibition is specially curated by Birad Yagnik, Curator of Mahatma Gandhi Digital Museums, who shared the motif behind the exhibition while speaking to DC.

"What we can learn through this exhibition is the price of freedom, which is quite well-displayed in this exhibition. Here the visitors and enthusiasts can learn about the special qualities and attributes these two leaders have had during their battles and journeys, which led to the meaningful changes in this region," Yagnik told DC.

Hosted by the High Commission of India in association with the Ministry of Cultural Affairs, Bangladesh and Bangladesh Shilpakala Academy, the exhibition will remain in Dhaka from September 26 to October 11.

After Dhaka, the Bangabandhu-Bapu Digital Exhibition will also be displayed at Chattogram, Sylhet, Rajshahi, and Khulna, and then the exhibition will move to the United Nations for display and later it will culminate in Kolkata in 2022, Yagnik told DC.

The exhibition was specially curated by the two Governments to commemorate Mujib Borsho and to mark 150 years of the birth of Mahatma Gandhi, as well as the golden jubilee of India-Bangladesh bilateral relations.

Earlier, the exhibition was virtually inaugurated by Prime Minister Sheikh Hasina and Indian Prime Minister of India Narendra Modi on December 16, 2020 during the India-Bangladesh Virtual Summit.

During the visit of Prime Minister Narendra Modi to Bangladesh in March 2021, the two leaders visited and appreciated the digital exhibition at a special display arranged at Bangabandhu International Conference Center, Dhaka.

This unique digital exhibition was also displayed at Vigyan Bhavan, New Delhi from December 16; 2020 to January 31, 2021 where it was well-received.

Historic quotes of the two great leaders are being exhibited on the walls in the exhibition, alongside photographs and digital contents on different historic events of the two countries.

The horrific brutality behind the pain and suffering of Indian and Bangladeshi people during two barbaric genocides are being showcased in the dedicated wall and the "genocide tunnel" at the exhibition: the Jallianwala Bagh massacre in 1919 and the genocide perpetrated by the Pakistani army in 1971 War of Liberation. Photographs on the barbaric torture on Bangladeshi women by the Pakistani army during the country's War of Independence in 1971 are specially featured on this display.

Photographs of Bangamata Sheikh Fazilatunnessa Mujib and Prime Minister Sheikh Hasina on different historic events are also being displayed, as well as a special Holographic Time Machine, displaying historical photos with specific timelines through providing a unique interface to the audience.

Artist Mahfuzur Rahman's paintings to be displayed a ...