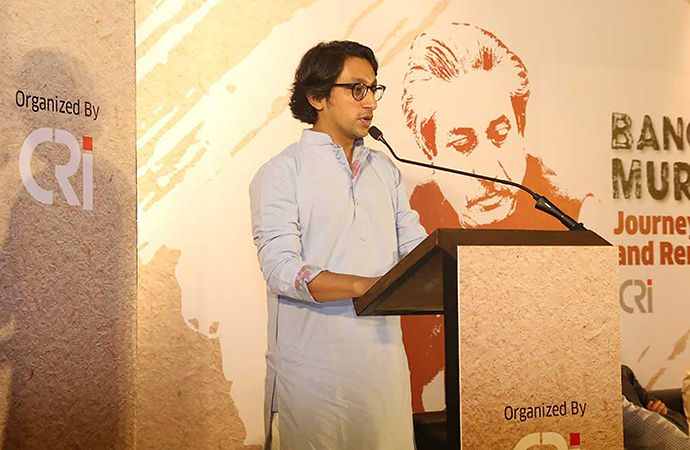 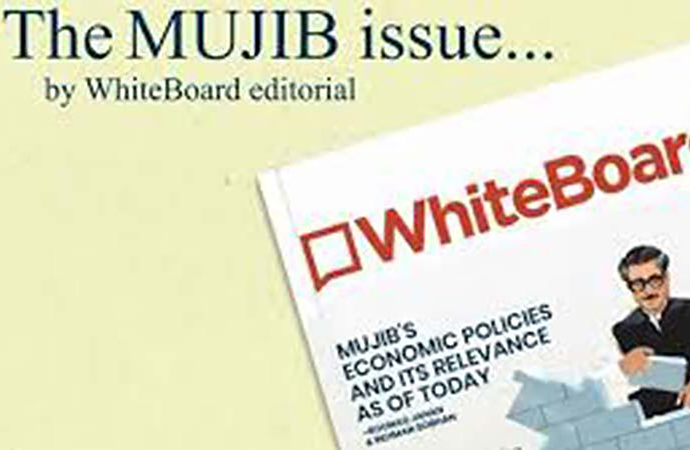 Bangladesh's development in the last ten years has a lot to do with going back to its founding principles, according to Radwan Mujib Siddiq, Bangabandhu's grandson and Trustee of the Centre for Research and Information (CRI), an Awami League think-tank.

He made the remark during the online launch of a policy magazine, 'WhiteBoard, on September 20 (Sunday).

Radwan, also the magazine's Editor in Chief, said the 'leave no one behind' policy of the current government of Prime Minister Sheikh Hasina was one it shared with Bangabandhu's short-lived administration.

Newly launched policy magazine WhiteBoard will always give 'balanced, objective and clear messages' to the policymakers, said Radwan during its launching through a webinar.

As revealed by Radwan Mujib, WhiteBoard will create space for the brightest minds not just in Bangladesh but for the Bangladeshis making a difference abroad and being capable to guide the country in overcoming the challenges it is dealing with.

The grandson of Bangabandhu Sheikh Mujibur Rahman reflected on the vision of the magazine, launched by ruling Awami League's research wing Centre for Research and Information (CRI), which will cover the gamut of policy issues in Bangladesh.

Valuing youths as the driving force of this magazine he said, "We are always open to our primary audience, which is the young generation."

Syed Mafiz Kamal, Co-editor of the magazine, moderated the event while Samia Huq, professor in the Department of Economics and Social Science, BRAC University, took part in the event.

Samia is also a member of the Editorial advisory board.

Reasoning why this is a timely initiative, Radwan wrote in the editor's note of the magazine, "Why have we launched this new initiative? Because Bangladesh is growing rapidly and confronting new challenges, with young people at the helm. Bangladesh is set to be among the world's top 30 economies by 2030."

But, he said, there is a lack of data-driven and coherent analysis of what is happening in the country.

"This is where WhiteBoard steps in. Aimed at students and young professionals, policy-makers, and practitioners, both at home and abroad, WhiteBoard will be the go-to resource for the latest commentary on Bangladesh. We promote evidence-based analysis and incisive debate on topics ranging from the economy to gender-based violence, from tech innovation to youth employment. Nothing is off the table!"

The first issue brings forth Father of the Nation Bangabandhu Sheikh Mujibur Rahman's policies that outlined the nation's progress in the post-liberation war-torn country.

Talking about how the policies of Bangabandhu relate to today's policy landscape of Bangladesh, Radwan said that the country in last 10 years went back to some of its founding principles and one of them is 'friendship to all and malice to none', which relates to the country's good relation with so many economic partners.

As revealed by CRI sources, this issue debunks the myths about Bangabandhu's administration -- created and disseminated following the assassination of Bangabandhu and 16 of his family members in 1975.

The policies and methodologies of Bangabandhu, often lost under the weight of his other charismatic accomplishments such as fiery speeches and pro-liberation leadership, do deserve a chance to be heard by modern policymakers, youths.

All the content developers of this magazine are endowed with a track record of possessing ample knowledge of the vision.

The stories came under the titles of 'Emerging from the village to mark a new country on the map', 'Mujib's economic policies and their relevance today', 'Economic development through political stability', 'Just like today's progressive politics', 'BaKSAL was social-democratic in nature', 'Bangladesh's Constitution of 1972: an exposition of Mujib's political philosophy', 'How Mujib co-managed one of the largest relief operations in the world', 'Friendship towards all was a masterstroke', and 'Mujib administration's policy action timeline'.

In a detailed interview published in the magazine, Syed Badrul Ahsan shed light on the common misperceptions about the formation of the Bangladesh Krishak Sramik Awami League (BaKSAL) by Bangabandhu.

"The term 'BaKSAL' is used in a very critical or pejorative way. But it should be described as a second revolution, as Mujib conceived of it. Mujib's first revolution was the liberation war and the achievement of independence in 1971. The second revolution was largely geared towards the economic emancipation of the people. That is the way he looked at it," he said in the interview.

Recounting how Bangabandhu had to build everything from scratch in a war-ravaged country, Julian Francis wrote, "During the war, all communication, social and industrial infrastructure had been targeted. Transportation networks had been destroyed - bridges, roads, culverts, railways, and waterways. More than 300 rail and road bridges had been demolished.

The damage done in the transportation and communication sector was estimated at USD 160 million. The main trading hub, Chittagong Port, had been ruined. Nearly 22,000 educational institutions, including 18,000 primary schools, had been damaged. The cost to public assets stood at USD 350 million.The challenges before Mujib were thus huge, especially in the early phase of the reconstruction process. The government took up this Herculean task along with its development partners. It was estimated that the reintegration of refugees and the internally displaced would require the construction of 43 million houses."

There are many developments the youths can see today but what they don't know is that the seed of those developments was sown and nurtured by Bangabandhu and those futuristic policies have come alive through the pages of this magazine.

The unveiling of this chapter is a tribute to the Father of the Nation on his birth centenary and the magazine will be a lighthouse for policymakers who will be able to model their policies on his vision, said CRI today.

Previously scheduled for March, the month of Bangabandhu's birth, the launch was deferred due to the Covid-19 pandemic that took a toll on the entire planet.

This initiative complements other efforts of the CRI such as the launching of "Mujib", a graphic novel based on the life and vision of young Mujib which is the first of its kind in Bangladesh in terms of comic-style narration on the life of a historical figure.

The future editions of WhiteBoard will delve into crucial matters of national policymaking from an angle that usual advocacy groups and donor agencies have left a void.

During the webinar, Radwan Mujib also disclosed that the upcoming issues of the magazine will cover COVID-19 and Bangladesh-50.

"We are launching WhiteBoard because we believe we will bring in new ideas into the policy-sphere of our country; the quality of our magazine should speak for itself," said Syed Mafiz Kamal, co-editor, WhiteBoard.

No alternative to public transport to build a livabl ...