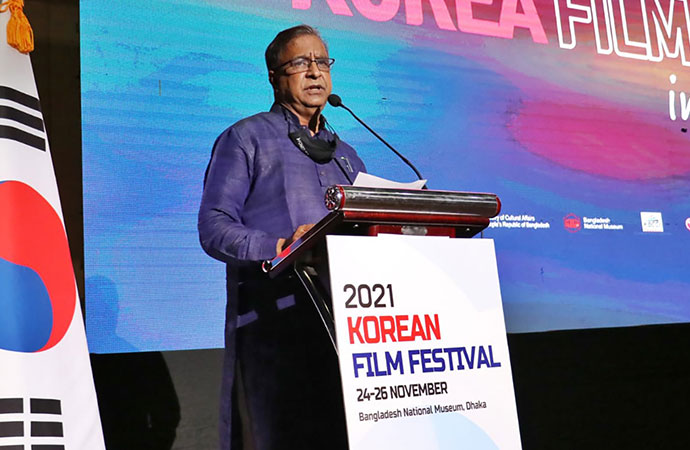 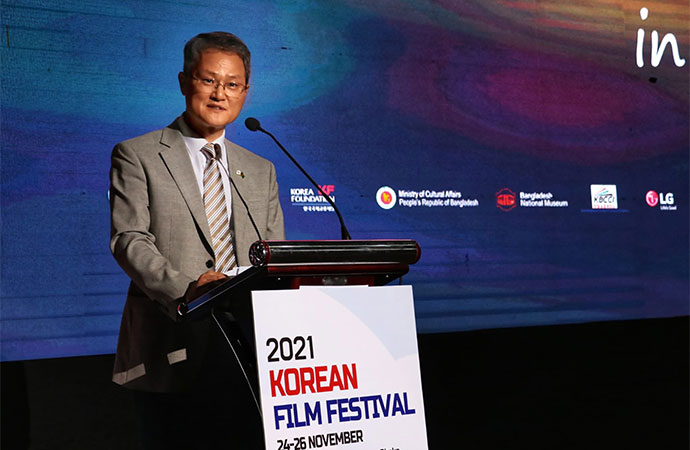 State Minister for Cultural Affairs KM Khalid on Wednesday said the cultural ties between Bangladesh and South Korea will become stronger as the government has planned for more cultural exchanges between the two nations.

"One of the biggest development partners of Bangladesh, South Korea and its culture has a very harmonious connection with us and Bangladeshi people love the South Korean culture. In order to further strengthening the cultural exchanges between the two countries, we are planning a cultural exchange programme," Khalid said.

He inaugurated the Korean Film and Tourism Festival 2021 as the chief guest at the Main Auditorium of the Bangladesh National Museum, Shahbagh in the capital.

"Over 75,000 Bangladeshi and Korean people are currently working together in the Korean EPZ in Chattogram, while many Bangladeshi students are currently studying in Korea and vice-versa. They have honoured our Father of the Nation Bangabandhu Sheikh Mujibur Rahman through establishing 'Bangabandhu Corner' in several universities in South Korea, as part of the Mujib Year celebration. The country has already preserved our 'Baro Sardar Bari,' one of the most significant heritage sites in Sonargaon, which was the first attempt to preserve a cultural heritage site in Bangladesh."

Greeting the audiences in Bengali, ambassador Lee Jang-Keun said, "After waiting for so long, we are very pleased to resume this long waited festival and ready to satiate the appetite for the Korean films and beyond. We have been organising this festival for about 10 years, which had to be postponed in the past year due to the Covid-19 pandemic but we are really happy that it is again being organized this year, and we thank the State Minister KM Khalid and Bangladesh National Museum for organizing the event."

"Our K-Pop (Korean Pop) has already been pretty popular around the world, and in recent years, Korean culture received worldwide acclaim for the popular 2019 Korean film "Parasite" which became the first non-English language film to win the best picture award in the 92-year history of the Academy Awards in 2019. Also, the recent Netflix series 'Squid Game' has become the biggest success for the streaming giant, and we are really happy to showcase our enriched Korean culture through festivals like this," he added.

Zakir Hossain Raju, Head of the Media and.Communication Department at the Independent University Bangladesh (IUB) also spoke at the event. He described the popular 2019 Korean film "Parasite" before its premiere at the event, and also narrated the struggle Bong Joon-ho, the director of the film, went through while directing this masterpiece.

On the sideline of the film screening, the Korean Tourism Festival is also being paralleled at the National Museum of Bangladesh, with an aim to showcase the picturesque scenery of South Korea to Bangladeshi visitors.

At least 31 migrants bound for Britain died when the ...