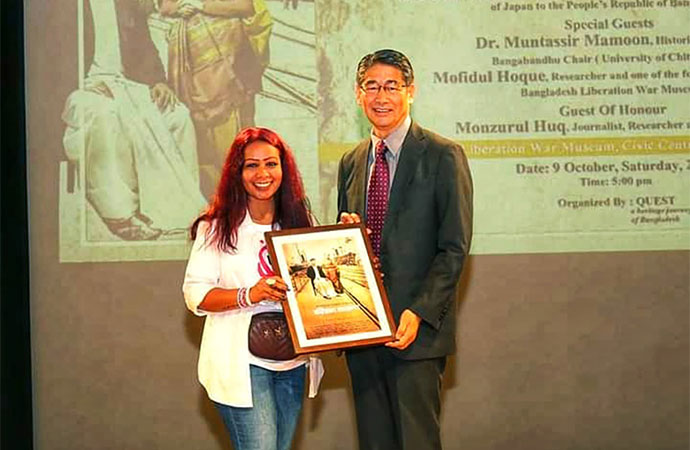 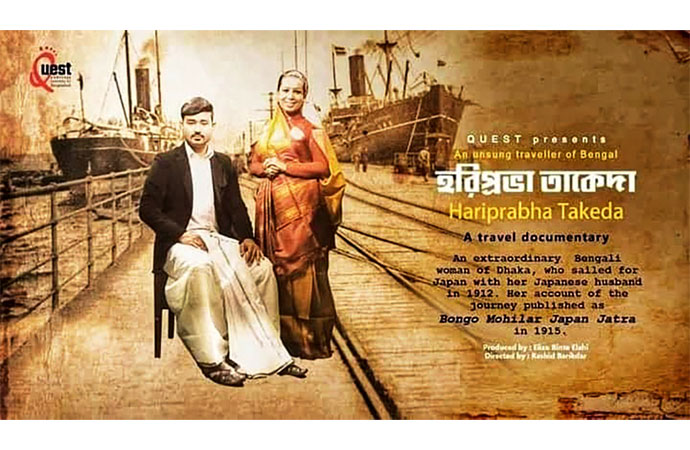 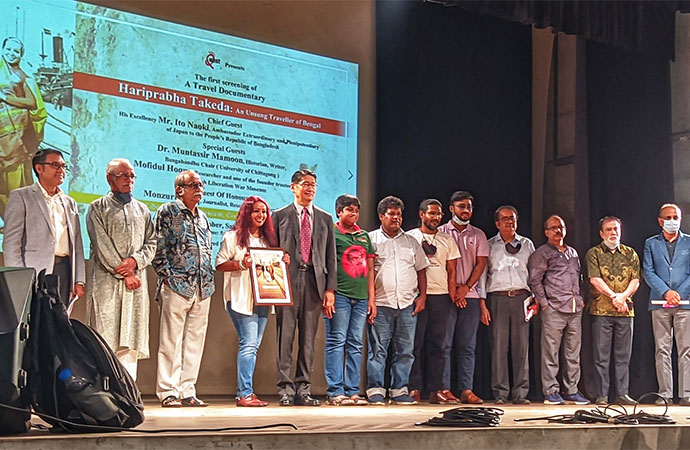 The word 'Journey' denotes the act of travelling from one place to another, through which people can gather and exchange knowledge outside of the traditional curriculum. It has become a regularity within human societies from the very beginning of civilization on this earth, and nowadays people are even travelling to the moon or Mars. There are some travellers who cemented their names in history through some of their significant journeys, and there was one Hariprabha Takeda - a Bengali Brahmo woman from Dhaka, Bangladesh in the early 20th century, who not only travelled Japan with her Japanese husband as the first-ever Bengali and Bangladeshi woman - but also documented her journey and remarkable experiences during her historically significant timeline, thus became an unforgettable part inside the beautiful friendship between the two Asian countries. Her historic tales are invaluable in every aspect, and realizing the necessity to preserve and showcase the fascinating stories of the legendary voyager, Bangladeshi traveller-educator Eliza Binte Elahi made 'Hariprabha Takeda: an unsung traveller of Bengal' which premiered on Saturday, October 9, at the Liberation War Museum (LWM), Agargaon, in the capital.

Before jumping to the aforementioned event, let's know some facts about the legendary voyager. Hariprabha Mallick Takeda (1890-1972) was born in Khilgaon, Dhaka in a 'Brahmo' family and was married to Uemon Takeda, a Japanese chemist employed in her father's soap factory in Dhaka called 'Indo-Japanese Soap Factory'. At the time of marriage, she was looking after a home for abandoned girls and destitute women in Dhaka's Nimtali. She and Uemon Takeda visited her in-laws in Nagoya, Japan for four months in 1912-13, about which she wrote her book "Bongo Mohilar Japan Jatra" in 1915. Later, when the Second World War broke out, she followed her husband to Japan once more, where she met Netaji Subhas Chandra Bose and was enthralled by his vision of an independent homeland liberated from the British with the assistance of the Japanese Army. She even worked as a news broadcaster in Bengali, on behalf of the Azad Hind Fauj on Tokyo Radio during the Second World War. She settled permanently in Japan in 1941, however, later moved to Jalpaiguri, West Bengal and settled there after her husband's death in 1948.

Praising Eliza Binte Elahi's effort behind producing the captivating story of the first Bengali modern woman of Dhaka, guests and audiences lauded the documentary film after its inaugural screening at the LWM auditorium. "I learned about the story of Hariprabha Takeda three months ago, when I attended the Cosmos Foundation's virtual dialogue on "Bangladesh-Japan Relations: Prognosis for the Future" from renowned Bangladesh scholar Monzurul Huq who really emphasized the significance of Hariprabha's story, and the history of Japan and Bangladesh; the friendship and partnership between the two countries, and the people to people exchange. She was a really courageous woman, a pioneer who overcame the difficulties of her time. Though there are cultural similarities between Japan and Bangladesh (rice culture, fish-eating culture etc) which might have helped her to get familiarized herself in Japan, nonetheless, her story is truly fascinating," Naoki said at the event.

Professor Muntasir Mamun emphasized the cultural impact made by Hariprabha Takeda, whom he referred to as the "first Bengali modern woman of Dhaka in history" in his previous scholarly article for 'Kali o Kalam' magazine and also in the documentary itself. "The true innate meaning of 'Modernism' does not depend on how modern a person is with clothes or academic degrees; it depends on the viewpoint and mentality. Over a hundred years ago, a Bengali woman married a Japanese man, adopted the cultural identity of both countries and also wrote her experiences as a traveller - I believe that speaks volumes supporting her modernist identity," Mamun said at the event.

"In 1971, the civil society of Japan cordially assisted Bangladesh, and in respect to the glorious friendship between the two countries, I would request the concerned authorities to dub the film in the Japanese language so that our Japanese friends can learn about this amazing documentary made by Eliza," he added.

LWM trustee Mofidul Hoque praised Eliza Binte Elahi's cordial effort, saying, "Apart from the brilliant storytelling, I think the film has also focused on minor details, and the detailing has been done very intelligently which gave us the feel and aura of the lost period, which is not easy to bring alive again."

Bangladeshi scholar Monzurul Huq, who is the man behind the resurrection of Hariprabha Takeda in the present historical timeline, conveyed his greetings and expressed his admiration for the film via a video message at the inaugural screening event. He played a major role in rediscovering and addressing Hariprabha Takeda to the world by locating a copy of her book in London's Indian Office Library, which was published by her sister Santiprabha Mullick in 1915. Later, Huq brought out an edition of the book in 1999 and two more editions were published later in Delhi (2007) and Kolkata (2009) by others. Surojit Dasgupta, the nephew Hariprabha Takeda lived with in the latter years of her life, discovered the handwritten manuscript of her experience in Japan during WWII after her death, and it was published with the book about her first journey by Manjushree Sinha from Kolkata in 2009. Sinha's version also includes a previously unpublished Bengali piece by Hariprabha, titled "Child Rearing and Women's Education in Japan," which was first published in the Bengali journal 'Bharatbarsha' in 1949.

Through the video message, Monzurul Huq said, "Hariprabha and her Japanese husband Uemon Takeda are true pioneers, who laid the foundation of very cordial bilateral relations between the two countries. She married a foreign national at a time when women were supposed to stay at home and follow straight social order. She travelled to an unknown world and also shared her experiences for the others, through writing a book on what she has seen which was published in 1915 and all the proceedings were donated for 'Matriniketan,' a shelter home for abandoned girls and destitute women in Dhaka's Nimtali, run by her family. Today is a very happy day for me personally, as we are celebrating the untold tales of Hariprabha Takeda with this documentary, and I propose to the concerned authority to name a station in the Metro Rail project in Dhaka, by the name of Hariprabha Takeda."

Watanabe Kazuhiro, the chief of Bangla Department of Japan's public media organization NHK World and Japanese journalist Tamami Kawakami also conveyed their feelings regarding the documentary through video messages, and Producer Eliza Binte Elahi who also played the character of Hariprabha in the documentary, talked about her experience behind the project and expressed her gratitude towards the concerns at the screening. "Discovering and presenting Hariprabha Takeda through the documentary was a challenge, nonetheless it was truly an amazing experience for me. I feel honoured to showcase her amazing tale through this film, which I believe will enthral the audiences," she said.

The 26 minutes documentary was shot in several locations in Dhaka, recreating the picturesque atmosphere of Hariphaba's time in history back in the early years of 1900. Several renowned personalities demonstrated the fascinating tales of Hariprabha in the documentary, including Monzurul Huq, Muntasir Mamun, 'Kali o Kalam' magazine editor late Abul Hasnat, and Watanabe Kazuhiro.

An absolute 'modern' woman who fascinated everyone through her choices, her journeys, her spontaneous description of those journeys and also the culture and significant incidents she observed in Bangladesh and Japan during her time in history - altogether made Hariprabha Takeda a name that the world must acknowledge with respect. The 26-minutes documentary truly seemed a befitting tribute to the legendary voyager, rightfully called and known as the "first modern woman of Dhaka in history".

Pele: First Brazilian football player to be dubbed a ...