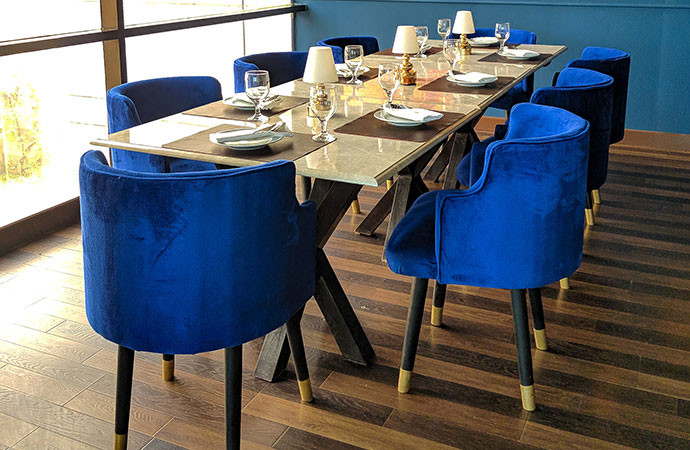 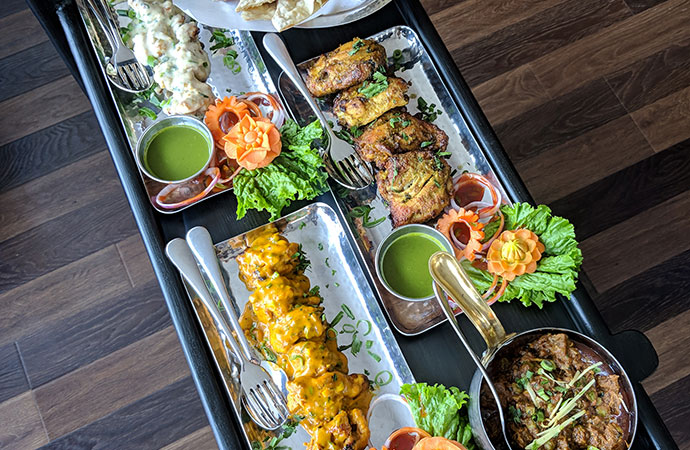 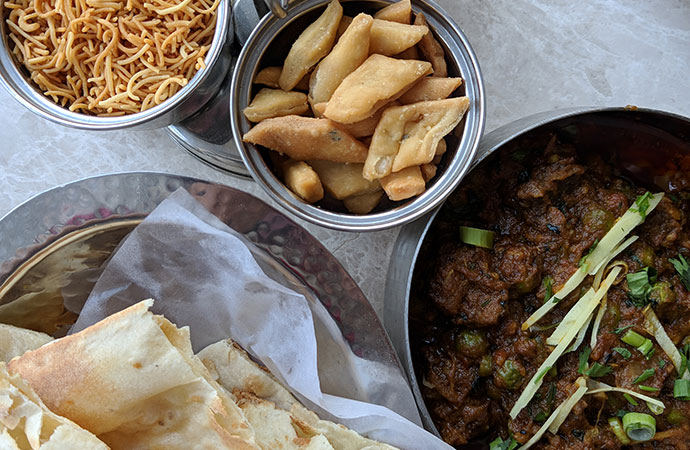 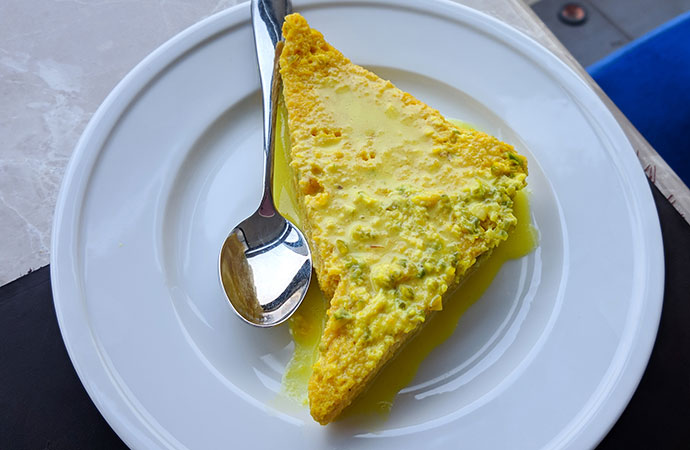 I absolutely had to visit Tarka after their relocation because of the beautiful interior I kept seeing on people's stories. The decoration is very pleasing to the eye with pops of blue furniture and the metallic hints on their d&eacute;cor pieces make the place an Instragram worthy one.

We got started off with some Nimki, Peanuts and Bhujia on the house. They were so addictive that we kept munching on them till the end of our meal. The best part is you can ask for refills as much as you want! We ordered momos, kebabs, daal and desserts enough for 5-6 people.

For momos, we got the Darjeeling Chicken and Shrimp Momo. Their wraps were a little on the thicker side; something that would perfectly fit in the streets of Nepal. The stuffing of both the momos were abundant and well seasoned. The red dip was tangy and spicy complementing the dumpling perfectly. They will also serve a green spicy chutney if you ask for it.

The Bara Kebab was too traditional and bland for me. Big slices of chicken were charred and grilled. They tasted too basic infact, I prefer much cheaper ones that small hotels and restos serve over theirs. However, my other friends liked it quite a lot. The Malai chicken was delicious! It was buttery, sweet and juicy. These chunks of succulent chicken went great with the Naan. The Peshwari chicken was cut into small chunks as well. Tastewise, it was tangy and spicy. To me the Beef Peshwari had a taste similar to deshi beef curries that go great with "chaaler ruti" maybe that's why I was slightly disappointed. It was very easy to chew though and the gravy was delish! The Daal Makhni was the least appetizing among all the dishes. It didn't look or taste appetizing. It lacked seasoning, the kick and the consistency that traditional daal makhni has. It was bland and didn't look appetizing either. Kolkata Naan is crispy but not to the point that it crumbles and the Paneer Kulcha was delicious on its own; soft and cheesy!

Finally, for the dessert we got Shahi Tukra and Falooda. The Shahi Tukra had gathered raving reviews online and I had to try it out myself to see if it was as good as everyone claimed. It was dipped in Pesta Badam Milk goodness! Highly recommend this over the falooda which was overly sweet and wasn't served as chilled.

Blown Away by Bake Away Desserts

High on a mountain in the Himalayas, pristine drops fall from the mout ...