‘Beyond Candid’: talks, for the greater good 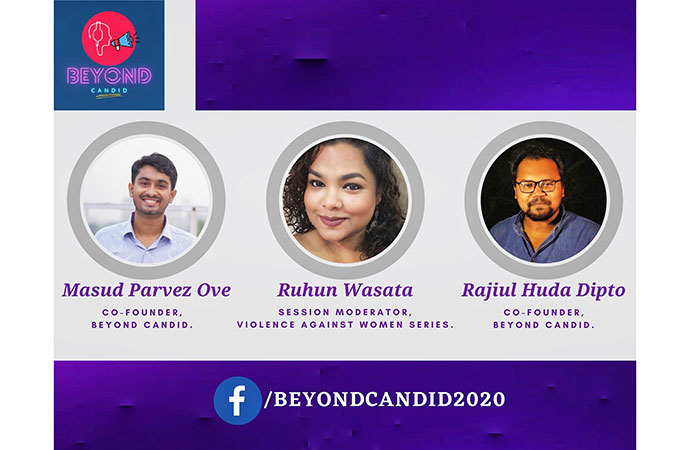 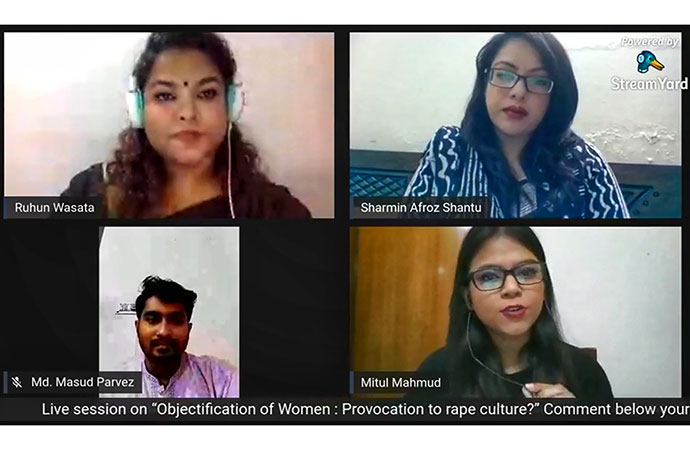 Technological advancement saw a rapid acceleration than ever in 2020, when the ongoing global pandemic of COVID-19 took over the charge. To avoid the contamination and continue communications with each other, people have been relying on technology like never before - be it online classes, official works or even concerts. Video/audio callings and live sessions on social media platforms became common during the era of lockdown. Although people in Bangladesh and all over the world are adopting the 'new normalcy' and started being social again after multiple lockdowns, the online culture is still going on as it has been proven as a more efficient option regarding communication.

During the busy times of virtual communication back in October, a horrible incident happened in the country. The infamous, brutal gang-rape incident in Begumganj, Noakhali shook everyone after the videotape of the rape went viral on social media. Utter disgust generated among mass people from this medieval brutality, which thrived a huge number of citizens to speak out. From celebrities to ordinary people - everyone aligned against the rape culture and violence against women; with protestors took over the streets and online platforms with massive movements.

"That cruel incident impacted me and I was heartbroken - I was angry, and I wanted to do something against these unthinkable, unbearable crimes. I know I share that mutual sentiment with many other people, yet I felt suffocated inside that I was not being able to do anything instantly against these activities. The night when the video went viral, I expressed my thoughts on Facebook. I felt helpless, thus I was eager to do something against it," Masud Parvez Ove, a Literature graduate from the Department of English at East West University (EWU), Dhaka; a young, social activist and a lecturer (college section) at the South Point School and College, who went on becoming one-half of the creators of the platform which this article is about, shared the inception story to DC about the collective journey towards something big.

Eventually, Ove's Facebook post got noticed by some people who shared a similar mindset, and one of them is Ruhun Wasata - a Senior Lecturer (on study leave) at the Department of Social Relations, East West University (EWU) in Dhaka, who is currently pursuing her PhD in Human Behavior, School of Public Health at the Indiana University in Bloomington, United States. Being a Senior Lecturer, she conducted courses including Introduction to Development Studies, Emergence of Bangladesh (Formerly known as Bangladesh Studies in which she found some of her students including Ove, as it has been a mandatory course for every department), Women in Development - to name a few. Apart from that, she actively played the role of being a mentor to students, on and off-campus for their career and personal development.

"After discovering Ove's Facebook post on that night - I contacted him, as I also felt the necessity to do something meaningful against these miserable acts. We talked on October 13, and four days later Ove and Dipto, the two co-founders, aired the pilot episode of a Facebook live series titled VAW (Violence Against Women), with establishing the platform that we call 'Beyond Candid' - a unified venture to share and discuss our collective thoughts," Ruhun Wasata, the founding moderator of Beyond Candid, told DC.

The venture initiated with Ove and the other co-founder of Beyond Candid, Rajiul Huda Dipto - a playwright, a screenplay writer, a skilled photographer, a literature graduate like Ove from the same department at EWU and now a post-graduate student in Master of Education (Specialised in Leadership in School Education) at Macquarie University, Australia. "The speciality of Beyond Candid is that it is simultaneously a casual and very serious platform. All of its associates and the distinguished guests are scholars and activists, and the topics we discuss are really very serious which we talk out through casual conversations. I and Ove, we both are used to have discussions at EWU on books, aspects of lives and more - of course, candidly, as the way friends discuss. So we decided to name the platform as an ode to our candid-conversations, and surely the topics such as the VAW series deserve more attention from both the scholars and mass audiences, beyond all our candid conversations between each other."

Dipto continued, "I and Ove, we live in Dhaka but both have our families in Chapainawabganj and Kushtia. So when the lockdown began, we left Dhaka for our homes. During the lockdown, I started noticing the blooming of virtual, live programmes which I thought a great way to continue the communication and conversations going on. Back in our university days, we (Ove and I) were part of arranging a reading series from one of our university clubs, so we thought about starting a discussion something similar using a virtual platform. We then went on conducting a live session as the hosts back in July, where we invited three of our university teachers in three episodes and it got positive responses. When the Begumganj-case went viral, I also felt the urge to be a part of something productive that can bring some effective changes, rather being a keyboard-warrior on Facebook - thus we brought back the modified and matured version of our talk-platform with Ove being the researcher and host, and Ruhun ma'am being the moderator who properly understood our visions, while I started behind the curtain."

"Although Ove was my direct student, Dipto was not - yet, I was happy to be associated with both of them, knowing their visions and motifs", Ruhun Wasata said about the two founders. Regarding the pilot episode, Ove explained: "Nowadays, violence against women is one of the most serious issues in our country that needs to be brought under the spotlight of social conversations. We thought that if we cannot stand up right away, we might not be able to stand up ever again. Therefore, reformation is a must - and to eliminate the ill practice of the term known as "Rape Culture" in our society, we started the series shedding light on the perspectives behind "Violence Against Women", aiming to educate ourselves with a purpose of bringing a mental change in general. Our first episode was "Language and Sexism" on October 17 with guest speaker Rabita Rahman, Lecturer, Institute of Modern Language at Jagannath University, Dhaka. The episode received rave reviews from the audiences and following that, we have arranged multiple episodes titled as: 'Does families influence on violence and rape?', "Does 'Toxic Masculinity' trigger rape culture?", "Objectification of Women: Provocation to rape culture?", "Discourse of violence stimulated by 'Media' and the transition of 'Rape' becoming a 'Culture'", "Rape Culture and Violence in Educational Institution(s)" and the upcoming 'Workplace Harassment: Part of Rape Culture?'. All these episodes featured distinguished guests from well-reputed organizations who explained the reasoning behind the problems and fruitful solutions. We also had another special episode featuring seven young professionals including us from EWU, on the episode titled "A Transition between 'Dream' to 'Reality'".

"We use StreamYard (Zoom meeting was used in the special episode) which we do not have to pay beyond our limit and we do not have high technological advancements for sure, as we started this platform out of our emotions to cater a change - yet we are moving forward with our spirits", Dipto added. Team Beyond Candid has two other incredible interns - Ove's sister Jarin Tasnim Mim, who is now preparing for her University admission and Dipto's younger brother Samiul Huda Digonto, a 1st-year HSC student at Bir Shreshtha Noor Mohammad Public College. "From research to broadcasting, they both help us as the interns and Amrin Mehjabin, one of my students who write report on every episode which we have further plans to utilize", Ove added.

With over 1,300 likes and over 1,400 people actively following the sessions on every Saturday, Beyond Candid is vowing to have further discussions on various topics after the VAW series, with an aim to stop the age-old stigmas. "We have received overwhelming responses from other reputed professionals and institutions - together with whom, we are going to bring more valuable discussions. Being the millennials, we have that responsibility - and we believe these discussions should be continued, for the greater good" - team Beyond Candid hopes to refine the narratives.

Iran will not accept preconditions from a new Biden ...

CHT: In search of an elusive peace